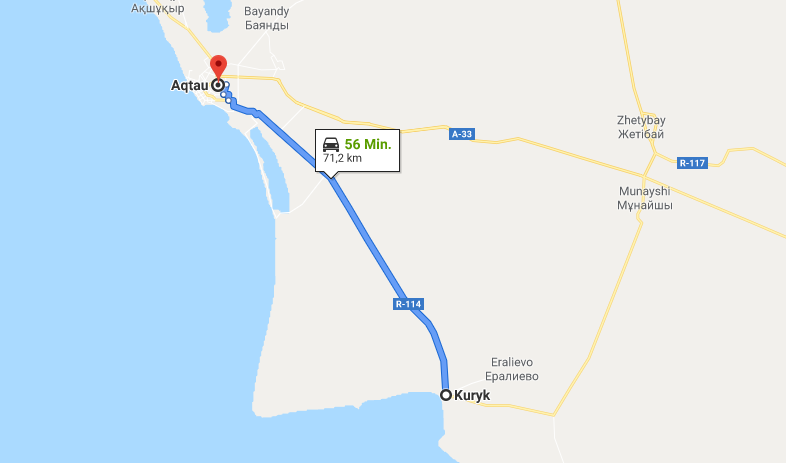 You wake up to the sound of sea. The first rays of the morning sun touch you face. You decide to stand up to have a look at the beach. As you stand up you hit your head on the roof of your cabin and realize that you are not on holiday in a five star hotel.

Ok, let’s get serious again. The situation in our cabin was pretty ok, our roommates were nice and we had the above mentioned window which allowed us to get some airflow by opening window and door at the same time. After the breakfast the speculations started: “When will we arrive today?”, “Will we get off the boat today?”. What we knew was that the entire passage takes less than 24 hours. This meant that we should be in Kazakhstan before 6pm today. Then the next variable would come into play: immigration and customs. We heard horror storries of earlier travellers which reported a lengthy process with many formalities. But we decided not to be biased and just hoped for the best.

Instead you are cramped into a two by four meters cabin with three other guys. The average temperature is over 25 degrees and instead of a buffet, the breakfast consists of hard boiled eggs, cheese and honey.

At lunchtime it became pretty clear that we would arrive in the afternoon. Shortly after lunch we could spot the coast for the first time and not long after that we arrived in the port. The first step of getting into Kazakhstan was getting back our passports. When we boarded we had given them to one of the crewmembers. Now it was time to get them back. This was one of the “famous” situations we had read of. Instead of a personal “Here is your passport”, they were laid out on a couch and the “free for all” was opened. After that we were a little unsure what to do and we wandered to the rear of the ship which was docked to the pier. Here we could see a delegation of Kazakh border guards walking towards the ship. They came on board and the immigration process began.

At first, all passengers with a vehicle received some document. After that, we had to wait in queue for the passport check. After that, we were allowed to leave the boat. Unsure where to go next, we followed the tarmac through the port complex. After one more random check we arrived in front of a huge customs building. Inside were a lot of desks and something that looked like a information desk. The worker there pointed us to some small sideroom where we had to pay some fee based on the first paper we were given on the ship. Temporary import fee? Insurance? Some other made up fee? We don’t know. As this had to be paid in Tenge – the Kazakh currency – Chris went to get some cash from the conveniently placed ATM. Upon getting the money he was so fascinated by the shiny bills that he walked away without taking his VISA card. This was only noticed by him several minutes later after the XYZ fee was paid.

By that time the ATM had eaten the card and wouldn’t give it back. After some loud banging on the top of the ATM (not literally) some local came to the help and called the bank. By this Chris got the information that the only chance to get back the card would be the next time the ATM will be refilled. This would be in approximately 14 days. No thanks. After some discussion and some swearing Chris decided to just contact the bank and have the card blocked. By this Fabi earned the position of “treasure master” as she was now the only one of us that could get cash without paying extra fees.

To make matters worse, while Chris was talking to the guys, some man arrived and requested the motorbikes to be driven away. As this was done, the next officer asked us to haul our luggage to the X-ray machine in order to have it checked. “Our luggage” included everything. Not even the aluminium panniers of the others were excluded from this. As Chris was still concerned with the financial matters he was the last to have his luggage checked. After his first bag the guard was pleased and we were “finished”. Yipphie, no need to take of the saddle bags. At least something positive so far. But it did not really help that much to restore his bad mood (caused by the missing credit card).

Are we done now? Nope. There was still one station to go, one more stamp to collect. Again unsure what we were waiting for, we lined up (more or less formal) for the processing by a military guy. Here we met some of the truck drivers from the boat. The guard posed the usual questions: “Brand of the bike”, “VIN number”, … Then, copies were made of our documents and some forms were filled using the computer. This didn’t take too long but combined with all the previous stations all of us were getting pretty annoyed. Also it was getting late’ish. The boat had arrived in the port at 3pm and now we were nearing 7pm..

Finally, there was no space left on our “stamp card”. So we rode of to the final checkpoint. The guard here only had a short look at card. Apparently he was satisfied with the number of stamps and we were allowed to leave the port!

With the sun quickly approaching the horizon we formed a plan with the other motorcyclists: Ride to Aqtau as quickly as possible (considering the speed limits) and find an affordable hotel for the night. As the GPS of the others were not working Chris took the lead and we took off. Luckily the street was in superb condition and we crossed the 70km quickly. With our arrival in Kazakhstan we had truly left Europe: there were camels standing next to the road minding their own business. In Aqtau, a hotel was found and after some confusion we got two rooms for 12 hours. As it was already after 8pm and we were not planning on sleeping too long this should be enough. After a quick shower we found a small but nice restaurant where we celebrated our save arrival in Kazakhstan!

Summarizing the Caspian sea ferry, we can definitely say that it is a unique experience. Not because the ship is a horrible, frightening death trap. Instead, while the ship may be old, it does not look like it would sink in the next minute. You just take a normal mean of transport which (by western standards) may be a bit rundown. But regardless of that, onboard everthing works – you get food, you have some sanitary facilities, beds are clean. It’s just a (basic) ship passage where you will inevitably get in touch with some locals (and other travellers). We will never forget how one of the truck drivers told us about the experiences he had made in European strip clubs during his past trips.

If you have the chance, take the ferry. Organizing everything is easier than it sounds. In the worst case you will spend some days in the port waiting for a boat to arrive. But that’s really all to fear. Just don’t expect a ship & passage by European standards 😉