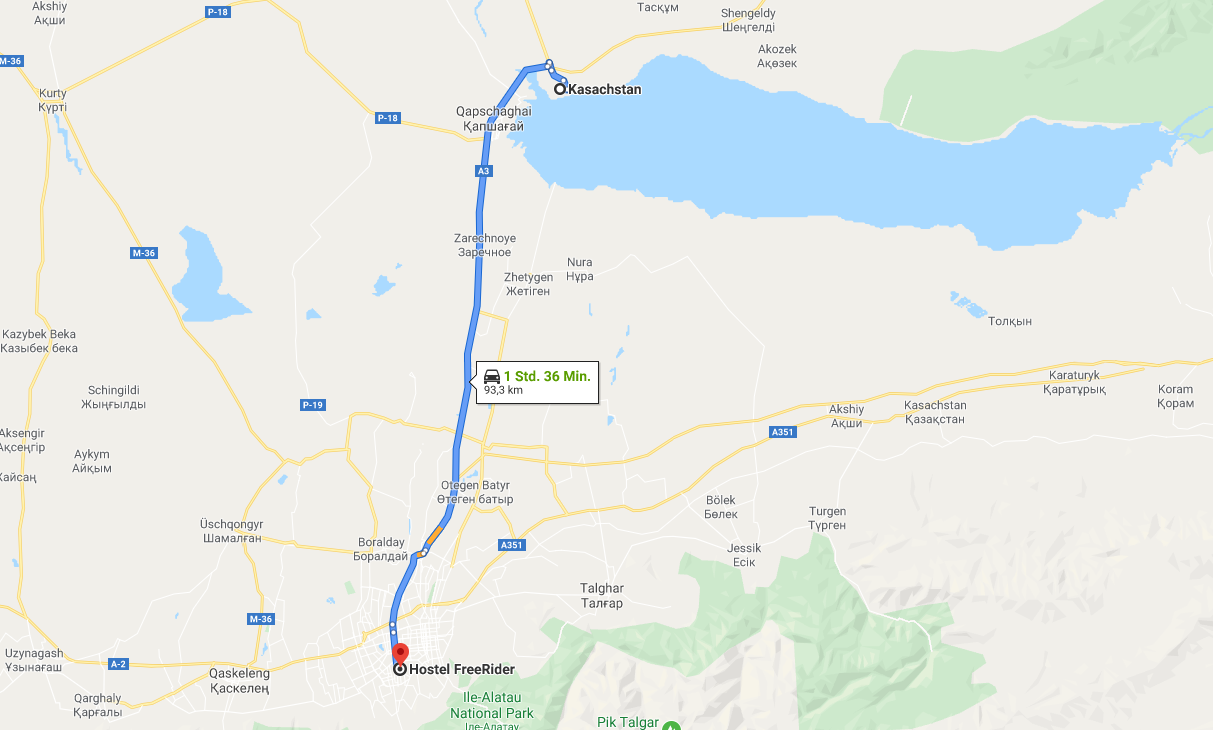 After going to bed early the previous evening, we got up pretty early (at least for our standards) – by doing so, we avoided having to pack up our tent with the sun blazing down at us. When we were done, we got back onto the main Autobahn which led us straight towards Almaty.

In the city, we headed straight to “Freerider KZ” – a combined workshop, hostel and motorcycle dealer. Staying there seemed like a good idea as we were going to wait for a package from Germany which would possibly take some more days to arrive. The package contained a set of steering head bearings which Chris wanted to get installed. Here, the workshop would come in handy. A second job we wanted to get done during our stay was checking the valve clearances on the Red Baron. As there is even a “BMW Motorrad” dealer in Alamaty, this should not be a problem to organize… right?

As we had gotten up very early, we arrived at the Almaty outskirts at approximately 9am – and encountered the full scale of… normal traffic. At 9am in Germany, most people are at their workplace already and the morning rushour is over – this is definitely not the case for Kazakhstan. The roads were absolutely packed with cars, busses, scooters and pedestrians – so don’t be fooled by the approximately 2h Google estimates for the ride. In reality it took way longer. Furthermore, the sun had started its way up the sky and was slowly roasting us on our bikes. Arriving at the Freerider workshop, we could directly ride into the workshop. Just above the workshop we found the hostel which directly connects to the dealer. It gets better: out of the front door of the dealer, turn left, go down the stairs and you arrive at the “Freerider Pub”. What else could you wish for?

Inside the workshop we encoundered a familiar looking face: It was once again Adrian who was just getting his chain replaced. Chris grabbed one of the mechanics and conveyed his intention to get his valves checked. As a result he just received a plain “We cannot do this” – followed by the explanation that they were lacking the required tools.The mechanic recommended to head over to “Bavaria Motors” as they might be able to do the job for us. As it was stilly early in the day, we hopped on Chris’ bike and rode over to Bavaria Motors. The dealer closely resembled the appearance we were used to from Germany. Inside the showroom you could see brand new BMW R1250GS and other bikes for sale. However, once we talked to one of the salesmen, we were promptly adjusted back to reality. Upon reading the (translated) question: “Can you check the valve clearances on my bike?” he replied: “I don’t know what this is”. After a little more back and forth, he roamed off to grab his english-speaking collegue. Said collegue only added to the confusion: “We never had anybody request this kind of work. Nobody does this here”. He added: “We can do an oil change”.

Well. That was less successful. We accepted this answer and headed back to Freerider KZ, wondering how this works in Almaty. Do people just buy bikes and ride them until the engine ceases to work? And then, they buy a new motorcycle? Back at the workshop we summarized the facts.

We could not get the valves of the Red Baron checked until we ride to either Astana or Nowosibirsk – unless we do it ourselves. For now we will wait until the package with the steering head bearings arrives. The bearings could then be installed by the Freerider workshop. Until the package arrives we will be staying at the hostel as it is quite affordable and the bikes are parked safely. On top of that we have Adrian and the one French we had previously met in Kyrgyztan as company while we wait.