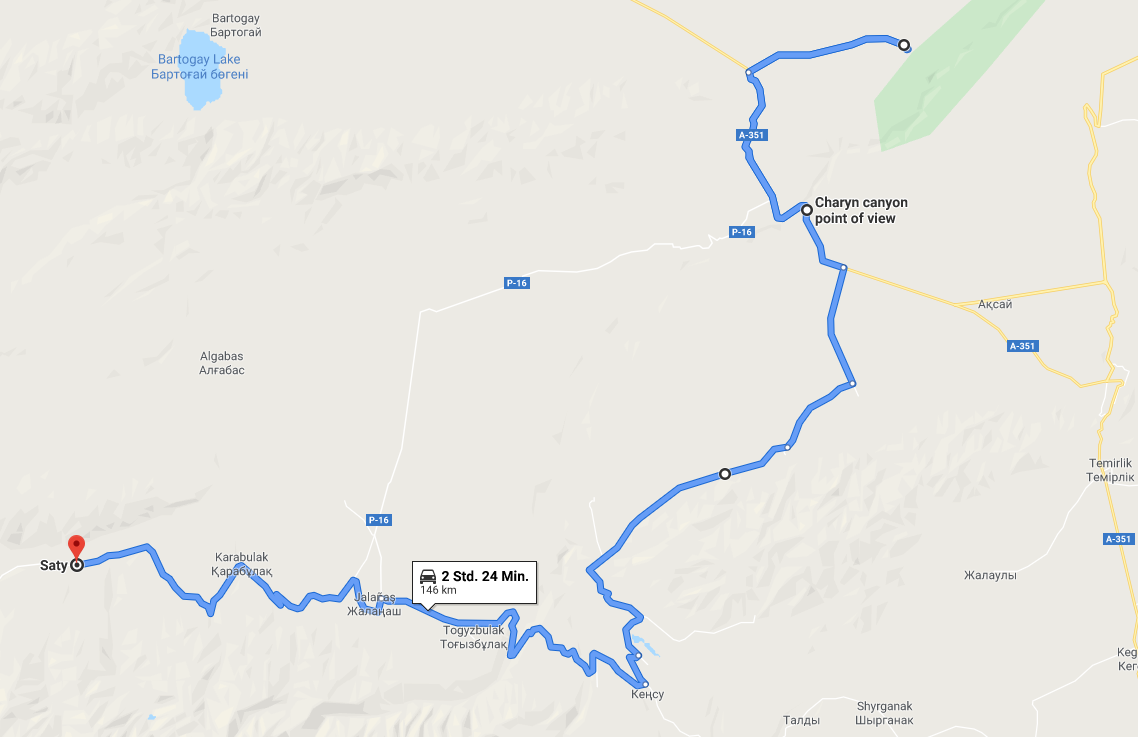 In the night it had been pretty cold for our thin summer sleeping bags resulting in us freezing a little, next time we maybe should add some clothes to our pyjamas to keep ourselves warm. But once the sun started to climb up the sky in the morning, temperatures promptly started to increase again skipping the “nice fresh morning” temperature range and going straight to “uncomfortably hot”.

Back on the road we rode to the official entry to the Charyn Canyon national park. In order to get to the canyon itself, a ticket/permit is required which is to be bought at an office on the way to the official parking lot. Entering the canyon with a motor vehicle is prohibited, the only option is to either walk down there or take a shuttle bus which drives inside regularily. We did neither of those options, instead we took photos from above which also came out pretty impressive.

For the next location to visit we had selected the Lake Kaindy. It is known for the tree trunks which are partly submerged in the water as well as well as its intense turquoise color. It is located at the very end of a valley off the main roads. But before we rode into the correct direction, we instead rode 30km in the wrong direction, had lunch there and then turned back again. In hindsight that was not exactly the smartest move. But we were not done with the “not so smart moves” for the day yet. While having lunch we also bought an additional sim card. The K-Cell card we had purchased in Aqtau was nearing the end of its one month activation period and also the reception was pretty bad during the last days. Maybe this would be better with an other provider. Buying the card was by far the easiest process so far: “Hello, one sim card please”, “Ok, here you go, 400 Tenge please”. After inserting the card in a phone it instantly had reception (albeit not too fast) without any kind of activation. Fascinating.

Then we rode towards lake Kaindy. 30km before the village where you turn off the road, there was a petrol station. With two more villages along the road, we thought: surely we will find petrol in time. The next village also had a petrol station which was closed, but a small boy told us: “There is a petrol station in the next village which certainly has fuel”. Believing him, we rode on until we arrived in Saty where the path towards lake Kaindy starts. The fuel station in Saty was permanently closed and we were only given the information: “If you need petrol you will have to drive out of the valley again”. As we were not sure if we would make it to lake Kaindy and back to the next petrol station without refueling, we turned around and rode the 25km back to the village with the one opened petrol station and back again. Once we arrived back in Saty, Fabi remembered that she should write an important mail before we would ride up to the lake without reception.

So, we took a lunch break, Fabi wrote her mail and sent it off. Promptly, she became a relply inquiring about a missing attachement. The only reason we could think off for the attachement going missing was the bad reception we had. In the village where we had refueled, the reception had been better. So, we turned around once more, Fabi sent the mail and we returned (it turned out the problem had not been on our side but rather at the receiver’s end).

In the end we had ridden the way to Saty three times instead of only one time. Not very efficient, but at least the landscape was nice to look at. Finally we were ready to ride up to the lake, where we wanted to camp this evening. Right after exiting the tarmac, the road became bumpy and in an overall horrendous condition. This alone would have been doable but we soon arrived at the first of supposedly two small river crossings. However, small was not really a term suitable to describe the crossing, Chris walked in and the water was higher than his boots and also flowing pretty fast. We looked at both options to cross and decided that we would refrain from crossing them.

On the way back to the normal road we looked for campspots but could not really find suitable (hidden) spots. Thankfully iOverlander had a campspot listed, however it was described as “low range gearbox may be necessary”. Should not be too bad, right? Chris had a look at the path leading to the campspot next to the river and skittered down with the rear wheel ABS deactivated, turning around on the way down wasn’t really an option.

While the campspot itself was pretty nice, we really did not want to stay there as getting back up to the road promised to be difficult, already with one bike. Chris tried to ride the bike up with all luggage but his rear wheel dug in and he could move neither forwards nor backwards. Fabi came to the rescue and together we removed all luggage and Fabi gave Chris a push strong enough to free the rear wheel. Once moving, Chris managed to ride the bike back up to a rather normal terrain. After carrying all luggage uphill over the rocky terrain in the hot weather both of us were drained of most of our energy and our desire to camp today was gone and it was also past 7pm.

So we rode to Saty which is a pretty touristic (by local standards) village and looked for a hostel or a homestay. By the owner of one hostel which was completely booked, we were directed to her neighbors which offered a room for us to stay for the night. In hindsight, staying there we payed way too much but when we arrived we were happy having found a place to stay.

Today contained a long series of not-so-smart decisions and events where we could/should have acted differently. Especially the bike being stuck at the bottom of the very steep hill and freeing it did cost both of us a lot of energy. In the future we should pay more attention to evaluate what is really doable and what may be difficult/not so smart.