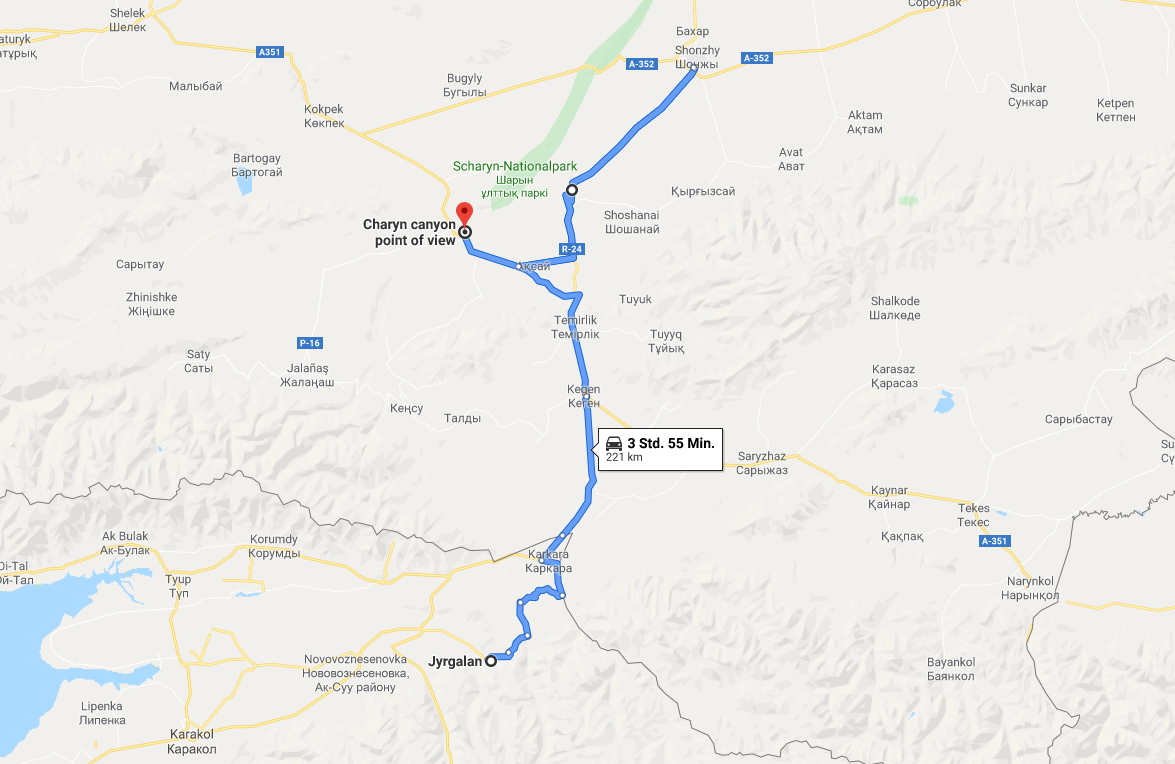 Having spent several days in Kyrgyztan looking for horses to rent without success, we decided to ride on and try our luck elsewhere. After all, there should also be horses in Kazakhstan, right?

The Charyn Canyon was one of the points of interest that we had marked as “we should go there” during our planning. For the route to the Kyrgyz-Kazhak border we followed the route calculated by maps.me which worked pretty well. Only in a small village we had to follow the route a local suggested us in order to drive around a bigger construction site. We were the only ones crossing the border to Kazakhstan and exiting Kyrgyztan was a matter of minutes. Present the passports, get them stamped, have a nice trip. Entry into Kazakhstan however was similar to our first entry by ferry three weeks ago, albeit a little faster. Again we had a slip of paper which had to be stamped 42 times, then there was a halfhearted baggage control and after a final stamp in our passport the border was passed.

Onwards from the border we drove to the first city in order to purchase insurance for our bikes. This is apparently mandatory, luckily we did not get into a traffic stop during our first leg of the Kazakhstan-trip. Locating the insurance office was a little tricky as it had moved recently. Luckily, one of the men at the old location guided us there and we went inside to get this formality out of the way. Calling the place “insurance office” is probably a bit too much. In reality it was an auto parts store which was bursting at the seams because there were so many different parts, boxes and other things standing around. Besides selling said parts, the owner was also an insurance broker and processed our insurance applications swiftly. In the end we payed around 10€ for a 14 day insurance period. The store was well-assorted and had plenty of parts for all car brands common in the area. Once again, it became apparent that the level of repairs that is done on cars is a lot greater than in Europe. There was a big selection of cylinder head gaskets, bearings, different actuators etc etc.

With the legal matters out of the way, we had lunch at a kebab booth and also bought some food supplies as we planned on camping this evening. On the way to the canyon, we stopped at a water fountain in the middle of nowhere. Based on the water coming out of a metal pipe in the ground, a small oasis had formed in the barren landscape. There was also a group of horses browsing the area, enjoying the freshwater supply. Naturally, Fabi went to befriend them but they were clearly not interested in making friends.

On iOverlander, there were several camping spots marked near the Charyn canyon which looked pretty inviting. When we arrived at the first one however, we realized that the suggested camping spot was not in the canyon, besides the river but rather on top of it, with the possibility to view into the canyon. While this provided spectacular views, this was not exactly what we were looking for as there was no natural water source available. So we rode on to the next campspot.

On the way to the second option, we passed by a parking lot near a observation point which provided a look over the surroundings. Stopped there, Fabi discovered a horse-statue located on top of a small hill and insisted on taking photos there. Right behind the parking lot, a small dirtroad started which led away from the main road, down towards the river. There, we found a series of small grass areas near the river which were ideal for camping. Sadly, there was a lot of garbage and broken glass bottles on most of the spots which had obviously been left behind by previous campers. But we managed to find a nice trash-free spot and set up our tent. After a bath in the ice cold river, a small campfire and dinner cooked on our cooker, it was finally time for bed. While we had seen a part of the Charyn canyon today, there was also an official entry to the national park – this would be our first goal tomorrow.