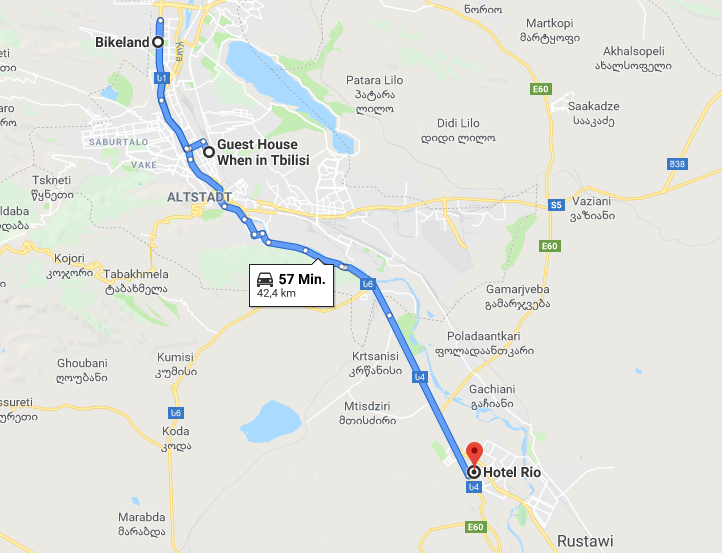 As the workshop appointment for Fabis bike was on the 25th of May, we had the opportunity to spend the day before in Tbilisi. The time was used by us partly to clean our bikes and clothes and also to have a walk in the city center of Tbilisi.

While we were on our way to a mall where Fabi wanted to buy a warmer scarf, we came past a flea market. Here the people sold the typical “old stuff from home which is no longer needed” as well as a enormous amount of paintings. We had a look around but decided that a painting would be too difficult to transport – so we didn’t buy one. Unfortunately Fabi also did not buy a thicker scarf as she did not find one she liked. We bought dinner at a “Carrefour” supermarket. One thing that caught our attention was the fact that you could buy noodles in arbitrary quantities from a chute. In Germany this would probably be a big “No no” due to health concerns.

On the next day we packed our bikes and headed for the workshop where we had our appointment at 10am. There was only one guy who apparently was the apprentice. At around 10:15 the other mechanics arrived and started the day by cleaning the working area. At least this gave the bike some time to cool down. We handed over the bike and went for a walk while the mechanic was working on the bike.

Before we left, Chris inquired about the possibility to change the chain. Unfortunately, he was told that this would probably not work as everybody was more than busy. As we walked to a nearby cafe, we were once again amazed by the variety of old vehicles that were driving and standing around. There was a coach from “Pfeiffer Reisen” in Germany and the number of cars where either the front or back fender was missing was too great to keep track.

After two hours we returned to the workshop and got the information that the clearance of all four valves was within the specification. Additionally we were told that it would be possible to change the chain of the bike of Chris. As the mechanic put together Fabis bike again and an other one was changing the chain we sat around and watched the other guys. Amazingly there were six or seven people in the workshop while only two of them were mechanics doing actual work. The others just stood around and watched. When Fabis bike was ready, Chris wanted to check the oil level of the Scottoiler. As he was pulling the bike on the center stand, he slipped and dropped the bike on its right side. Oops, that was embarassing.. The guys that were standing around quickly came to help him pick it back up but the damage to his pride was done (the bike was undamaged).

Shortly after that the mechanic finished the chain change and after paying for the service we were good to go. The valve check and chain change had taken several hours and it was already 3pm. So we decided not to head for the Georgian-Azerbaijani border but instead stay one more night in the vicinity of Tbilisi. Via booking.com we found a hotel which lay in the right direction. By sleeping there we would not need to go through the nightmare of Tbilisi traffic tomorrow but could directly head for the border.

We went out to get some food for dinner. Everything looked so delicious and we ended up buying a little bit too much food. Nevertheless, Chris ate it all and as a consequence, had stomach pain the entire night.