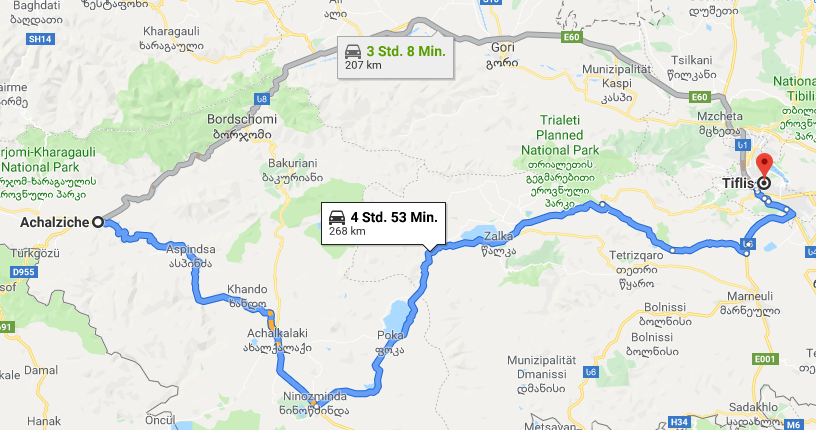 Our trip today was supposed to be quite short with a length of less than 300km. The route was planned by Maps.ME which suggested the shown route as the fastest way to get to our goal.

The first part of the trip led us – once again – through a river valley. As we tend to respect the speed limits, we got overtaken all the time. This gave us a nice opportunity to have a look at the car preferences of the Georgian drivers. It became apparent that they prefer German car brands, more specifically BMW and Mercedes. However, most of the models were not the recent ones but instead on average around 15 years old and often in a condition that would make German TÜV inspectors cry. Rust everywhere, broken lights, missing fenders combined with “incredible” modifications done to the exhaust systems and headlights.

But our amazement did not stop here. Also the trucks and other utility vehicles were a bit.. dated. At one point we saw some guys fixing a power line using an ancient fire ladder as lifting cart. From our perspective it might look odd, but if it works that’s fine I guess?

After leaving the river, we learned to respect the traffic signs. If there is a sign warning you from bumps on the road you better grab the breaks. “Bumps” in Georgia are no “oh my car moves a little” but rather “let’s mix the stuff the driver has in his trunk” not once but often for more than one kilometer. So we slowed down and passed these sections with the appropriate respect.

After we had stopped for refueling (One liter of benzin for significantly less than 0.75€) a construction site began.. There was no way around so we just drove right on the mud and dirt that was supposed to be covered with fresh tarmac in the future. And, oh boy, that was necessary. Like during previous sections with the “bumpy road” sign, the construction site was just a series of potholes covered in mud which did not stop for 30km. As a result, we had a quite bumpy ride and both got a decent portion of mud sprayed all over our bikes. Right in the middle of the construction site (which led through several villages) there was a herd of cows with several calfs. Fabi instantly bonded with the small cattle.

As we were reaching the end of the construction site, Chris noticed a strange sound coming from his chain. After stopping, he found out that his chain was very tight in one position while it was hanging loosely in all others. To overcome this for the moment, he reduced the overall chain tension. But the next step was clear: The chain had to be replaced. How convenient that we had an appointment in the workshop in two days. Maybe they would be able to also change the chain

After escaping the mud, we soon arrived in Tbilisi. Traffic there was “different” than in other major cities that we had driven in before. Lanes on the road only serve as an indication. If there are two lanes at a stoplight according to the road markings, you can be sure that there will be at least three in practice. In addition to the BMW and Mercedes preference, people in Tblisi also seem to love the Toyota Prius. There were SO MANY of them around.

Our first stop in Tbilisi was the workshop “Bikeland”. Here we stopped shortly in order to discuss how the valve check on Fabis bike would take place. Here we noted a small difference in the working mentality. In Germany, the standard procedure for a valve check is to bring the bike in the day before the actual check in order to let it cool down for a more accurate check. At bikeland they told us “just come in whenever your appointment is, it will be alright”. This means the bike will have time to cool down during the time it takes the mechanic to remove the required parts.. With a strange feeling we left and made our way to our hostel. The concept of city planning is a little different here. Entries to houses are not located directly at the street. Instead, there is always a small courtyard around which the houses are located. This results in small “courtyard communities” formed by the inhabitants of the houses which are entered from one yard.

After moving into our room for the next two days we walked to the city center for dinner and went to bed thereafter.