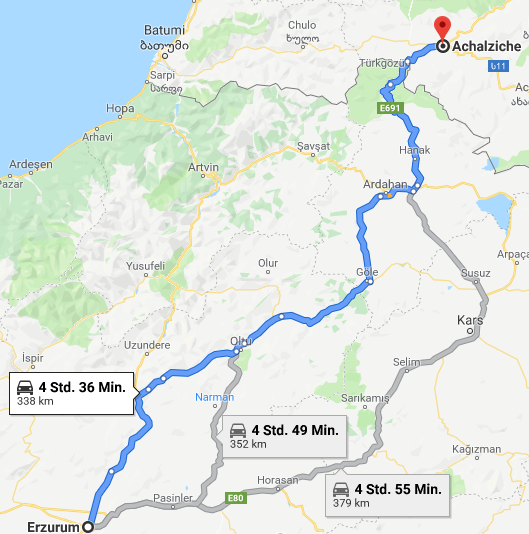 We chose the shortest route to Tbilisi as we had planned to get the valves of her bike checked there. The total distance was too large for one day so we split the trip up in two parts.

After leaving the city, the route at first led through a gorge. While we were riding the nice curves, Chris noticed that the light on Fabis’ bike was defective. So we stopped and inspected the lightbulb. Sure enough, the bulb was broken and had to be replaced. The relatively spacious construction of the cockpit made this a 5-minute job (ok, maybe 10). Then we were on the road again.

The fact that Fabi had a working light again was a good thing. Shortly after fixing the light, the sky became cloudy and it started to rain. Conveniently we were just passing by the last large’ish city before the border so we decided to stop for lunch. After a short search, we found a kebab shop where we ordered two pide. The atmosphere in town and while we were eating was a little strange. In the restaurant, all tables were laid but there was not a single person eating. The staff also seemed to be a bit puzzled by having customers at 1pm. Combined with the experience from yesterday evening, we concluded that the less touristy eastern Turkey takes ramadan a little more serious than the western part of the country. Therefore, the restaurants probably don’t expect any customers before sunset. Question is: Why are they open if they don’t expect any customers?

During lunch we also discussed the remainder of the day. The question to be answered was: Where will we stay for the night. Looking at booking.com we noted, that there were not too many accommodations between our current location and the Georgian border. So we decided to head for the border crossing.

Once we were finished the weather had gotten better and we rode on. We noted that the altitude was slowly increasing and after crossing a mountain pass we ended up on a high plateau with an altitude over 2000m. Just wide green pastures as far as the eye could see with occasional herds of cows on them. Just after crossing the last mountain pass we were stopped at a police checkpoint. After opening our helmets, the policeman asked us: “Do you speak Turkish?” (At least that’s what we think he asked. We only understood the “turkije” part). When the answer was “No”, he signalled us to ride on.

Faster than we had expected, we arrived at the border. As there were no queues and also only two guards, we shortly feared that the border would be closed. This turned out to be wrong and after clearing passport and vehicle checks, we exited Turkey. Next step was the entry of Georgie. Like in Turkey, the border guard got confused by the fact that the vehicle registration is on a different name than the one in our passport. Luckily, we had gotten documents from our parents which effectively read: “I authorize my son/daughter to import my vehicle into any other country”. After showing these to the official, he was satisfied and we were allowed to enter Georgia. Lastly, our luggage got checked and once we confirmed that we were carrying neither illegal drugs or immense amounts of alcohol we were good to go.

When preparing our trip, we found out that in Georgia it is compulsory to purchase an insurance for your vehicle regardless if you already have insurance. This meant that even though our green cards included Georgia, we stopped at the “Compulsory Insurance Office” located at the petrol station 500m after the border. There, a nice lady sold us the insurance for our bikes at a price of around 10€ per bike. Reading the insurance terms, we were releived that we also had our green cards. The coverage of the insurance was limited to 5.000€ per injured person. Compared to the German coverage that’s not very much.

The group was also accompanied by a journalist who documents the trip of the cyclist. He inquired about the possibility of one of us giving an interview for him. Fabi wasn’t too keen on that but Chris obliged and gave a short stand up report about us, the cyclists and our general opinion on Afghanistan.

After that we exchanged our last Lira to Georgian Lari and rode to Achalziche. We did not find the guesthouse right away but with the help of a local we finally got there. After our bikes got inside, we got dinner and fell asleep with the knowledge that the owner’s dog would keep our bikes safe.