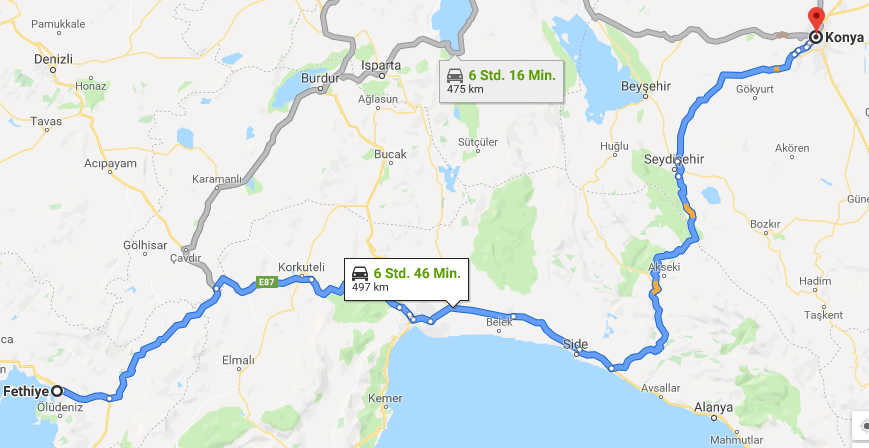 With the arrival at Fethiye, our detour had reached its end. The plan was now to get back on track and to ride to the region of Cappadocia. By going there we would leave the seaside regions of Turkey and climb into the more highly situated center of the country. This was a welcome change as the past days were uncomfortably hot. Going up often includes some nice curves – this was also true in this case. The first leg of the day took us from Fehiye to Antalya. Here we had lunch at a place where apparently not too many foreigners turn up. But with the usage of the trusty: “Point at things”, we managed to get two Köfte sandwich with salad. Surprisingly, Fabi really liked it and would have preferred an additional sandwich instead of the salad.

There we followed the seaside once more. During a small traffic jam, we were separated and Fabi was driving ahead. Then, Chris got pulled over by the police for a traffic control. As soon as the officer saw his German plate however, he was let go. As Fabi noticed too late, she was out of sight now. To make matters worse, the distance was so great that our intercom lost connection. After some stoplights and kilometers, we managed to join up again.

We then climbed up in the highlands. The road was mostly in good condition and where it wasn’t, there was construction taking place for a bigger road. Apparently, Turkey is investing a lot of money in its infrastructure. Our highest point of the day was the crossing of a 1803m high pass. There was snow laying besides the road! One very surprising thing was that every couple of kilometers, a small kiosk was besides the road selling either fruit or something that looked like honey. We never saw someone buying there but if noone would shop there, these stalls wouldn’t exist.

When the roads got a little less twisty (no more hairpins) we noticed that a coach was following us closely through the corners. We named him “racing bus” and assumed it was just the driver alone in the bus on his way back home having some fun. As we later stopped at a motorway station, the bus arrived shortly after us. Amazingly, it was not just the driver, but the bus was packed with passengers. So, if you go on a bus trip in Turkey, you better have a strong stomach 😉

Todays trip was pretty long, so it was slowly getting darker as we arrived in Konya where we had booked a hotel for the night. Here we had a premiere: The “safe parking” the hotel promoted was an underground garage which could only be accessed through an elevator! This is definitely the holder of the “safest parking” prize so far. Long day with lot’s of riding, therefore no pictures in this post.