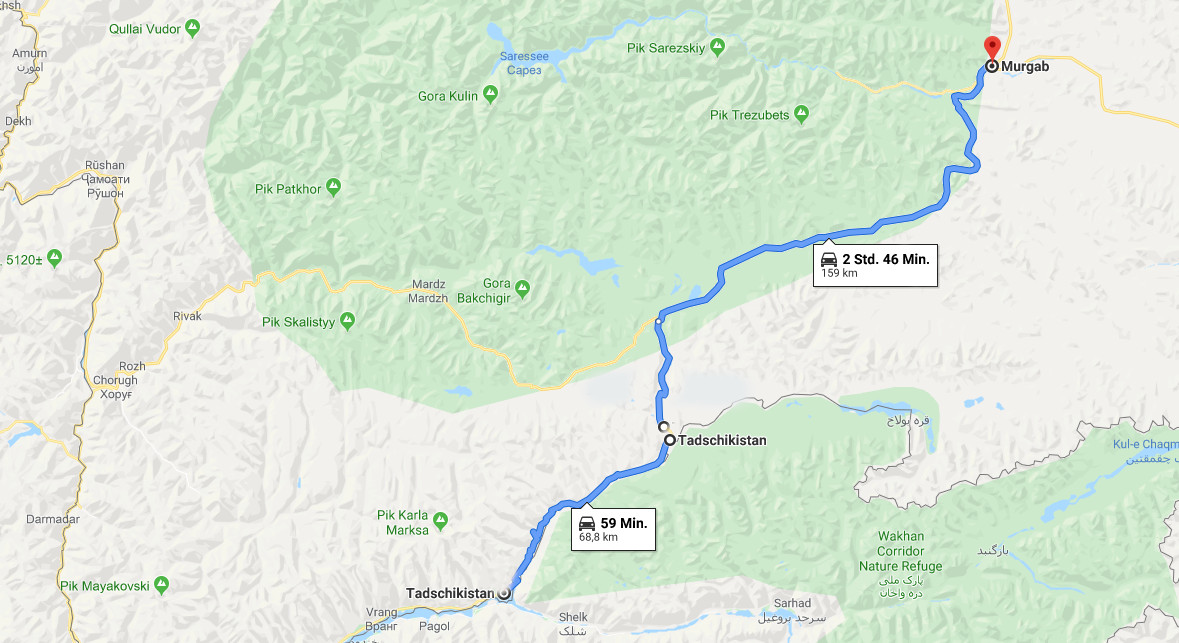 As can be seen by this and the last post, Google Maps does not like navigating the Pamir Highway. Normally that’s not a problem but if you want to make a map to show where you have driven, that’s not exactly helpful.

In the morning we had breakfast with the other travellers before we set off. Aaron (the Kiwi) was riding in our direction towards Murghab while the two Swedes headed to Chorug. Meanwhile the French cyclist wanted to stay at the hostel with plans to return to Dushanbe by Taxi. From there, his plan was to get to Kyrgyztan where he hoped to find some more motivation to continue his trip.

Right after Langar, the road made clear what we had to expect today: Through a series of narrow, rocky hairpins we spiraled up several hundreds of meters. Then we once again had a “mountain left, cliff right” situation while the road continued to climb. This elevated position resulted in amazing looks back into the Whakan Valley and down into the river-valley. Several times we caught up with Aaron while he was taking photos and also with a group of Russians who wanted to ride to Osh today.

While the road was not horribly bumpy it was ruther unplesant to ride: Long stretches of washboard-like road and occasional big dents in the road where water had accumulated. While passing by one of said dents, Fabi laid down her bike at a higher speed for the first time. While she was unharmed, a piece of her left pannier broke off. Unfortunately the piece was an essential part of the mounting system. As a consequence, the pannier could not be attached to her bike anymore. Chris tried fixing it but all efforts were futile. In the end we removed everything from the pannier and fastened it to the holder by using some rope.

Of course, military checkpoints were also part of todays leg. One of the checkpoints lay at over 4000m in the middle of nowhere. A strong, cold wind was whiffing making the inhospitable setting even less likable. The highest point of the day was at an elevation of 4300m height. After passing over it we descended onto the wide plains of Pamir. The last days we had mainly ridden through the narrow river valley. The highland now was the complete opposite. A wide plain with still even higher mountains in the distance. We thought it resembled a landscape like we would expect it on Mars or Moon. Through the flat landscape cut a single road: The dark, black Pamir Highway. We had returned it it and could enjoy the pleasure of riding on smooth tarmac. But not for too long as we quickly realized that the tarmac was not as smooth as it looked but rather wavy wich made riding too fast a dangerous undertaking.

A few words regarding the pictures: The photos really don’t to justice to the looks. The impression of seeing these landscapes in reality is not captured in the pictures even though we did our best.

In afternoon we reached Murghab. The truly lies in the middle of nowhere and the only resource that is available unlimited is: space. As a consequence, the only multi-story building was the hotel where we stayed. Electric power is only available at certain hours during the day. The hotel appears to be the hotspot for travellers. We reunited with Aaron and there were also several other motorcyclists and a German couple who had a Tadjik guide with them. Tomorrow we wanted to ride to Osh in Kyrgyztan, completing our journey over the Pamir Highway.