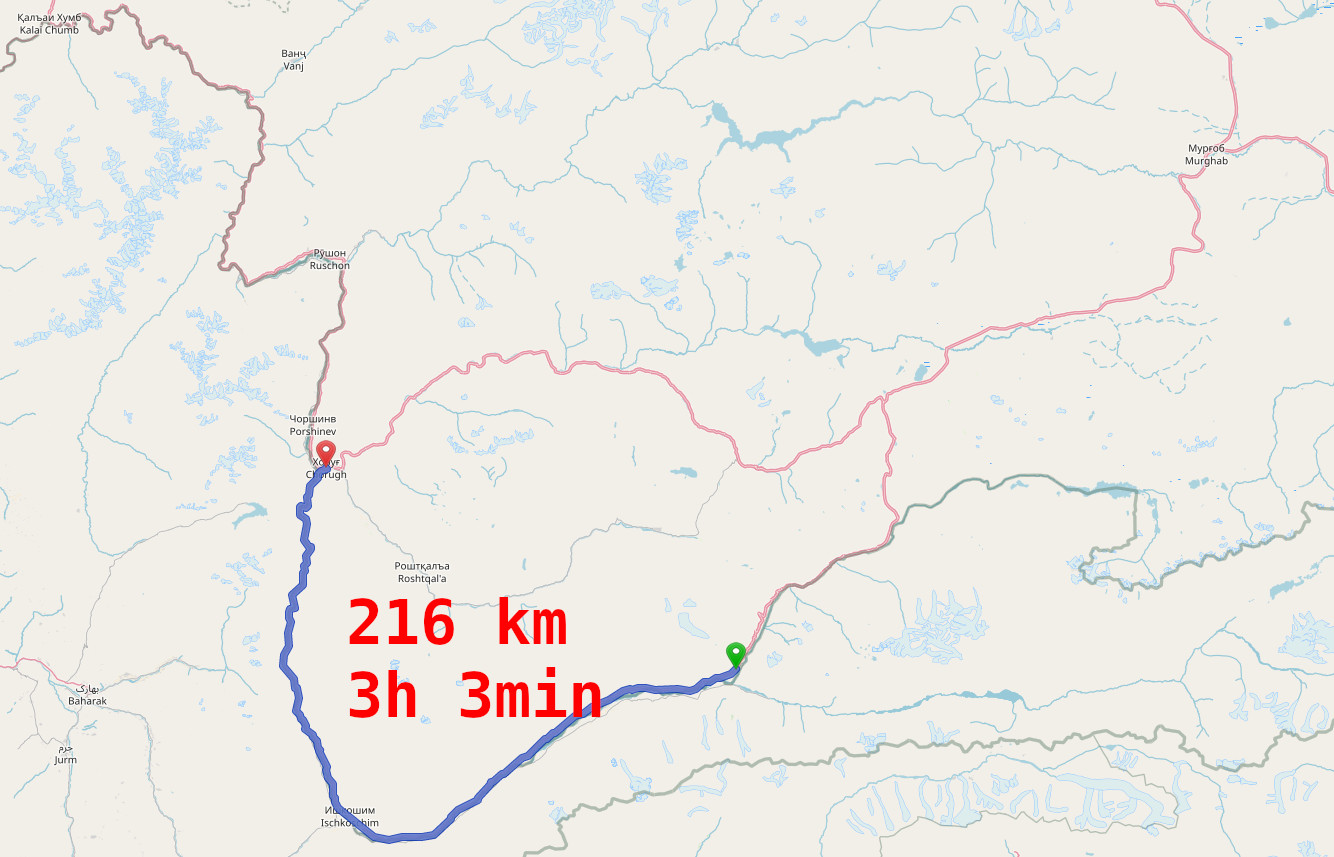 The conversation with the Belgian couple last evening had done the trick: We decided to drive through the Whakan Valley instead of skipping it and riding straight to Murghab. What worried us a little was the fact that we were told: “There is no tarmac in Whakan”. The prospect of 220km on dirt and sand roads sounded not that great, but doable.

So, after using the petrol station which lay on the way to fill up, we started our adventure into the Whakan Valley. The first 20km along the river were pretty pleasant, the tarmac was of good quality and there wasn’t a lot of traffic. We had been told that all trucks we had seen yesterday were taking the main Pamir Highway to Murghab (if they continued from Chorug) so that Whakan Valley was completely truck free! While we cruised along through smaller villages and past green pastures we could really enjoy the scenery. After said 20km the tarmac got worse but only to the level of “bumpy road” not “riding nightmare” as yesterday had been.

After 80km we reached the only bigger city in Whakan. Here, the tarmac got better again and shortly afterwards we stopped next to the ruins of an ancient castle. According to some information provided by our map it was built in the 5th century before christ. Due to the age there wasn’t really that much castle left but it was easy to imagine how the castle must once have looked. From the top of the ruins you had a nice view on the surroundings. In contrast to yesterday, the river valley was a lot wider and pastries or fields were covering the plains. At said ruins we also visited our first “souvenir shop” along the Pamir. A lady had built two small booths where she was offering different handcrafted items from Whakan and Afghanistan like purses or traditional clothing for sale. Fabi bought a few small items and we continued on our way.

Looking south we could see a long mountain range with snow covered slopes. Looking at our map revealed that this was in fact the “Hindu Kush Mountain Range”. In the year 2002 there was a discussion in German politics where a politician made the following statement: “The saftety of Germany is also being defended at the Hindu Kush”. Both of us knew this sentence but never had a really clear association with said “Hinu Kush” – but now it was clearly in sight just across the river. And from the Hindu Kush it wasn’t far to Pakistan and India. We had really come a long way in the last 1.5 months..

In one of the next cities we stopped because Chris wanted to take a picture of a waterfall which went down close to the street. As he stopped, a local approached him and engaged him into a typical conversation: The Russian of Chris was still non-existent and the man only knew a few english words. But after some back and forth, his intentions became clear: He wanted to invite us to his home for tea. He also make clear that “money no”, so no money was to be paid. As it was only early afternoon and we did not have far to ride anymore we accepted and followed him to his home. There, he led us to the main room of his house and we sat down besides one of the traditional low-tables. Now all sweets and delights that he had in his house were offered to us: Tea, home made jam, yogurt, bread, cookies and may other small pastries. While we were drinking our tea we were told about his son who apparently was living in Moscow (where he had also once been Taxi driver), supporting him with money. After that he played music to us on his small guitar. After about one hour we got on our way again. Unfortunately, the weather had changed from cloudy to rainy.

Almost immediately after passing by the waterfall again, the landscape changed from the wide river valley which was used for agricultural purposes to a rocky desert. Fitting to this, the road had also become worse and was covered in differently sized rocks and smaller potholes. After crossing the rock-desert the next “biome” was a sandy dune one. Occasionally there were sections where the road was covered in deep sand but there were maybe five of those which were a maximum of 50m long each. In between we were riding between sand dunes and questioned ourselves if we really were in Tadjikistan at 2500m or right next to the beach at the north sea. The only aspect not fitting to the seaside-illusion were the mountains behind the dunes. We rode the last 40km to Langar where we then looked for a Homestay or a hostel. After some time we spotted a hostel on the left hand side of the road where a bike and a bicycle were already parked in front. If a biker is there it surely can’t be that bad, right?

Turns out we were right! Turned out the bike was the KTM EXC 500 of the Kiwi we had met two days ago at Qal’ai Khumb! The bicycle on the other hand was from a Frenchman who had already seen our bikes waaaaay back in Uzbekistan (he admitted that he took a train through Uzbekistan). Right now he was struggeling and questioning if he should continue his trip. Riding alone all the time had apparently taken its toll. As dinnertime approached, two more motorcyclists arrived: Two Swedes on Royal Enfield 500’s. They had bought their bikes in India, shipped them to Almaty and were now riding them back home to Sweden.

While we had dinner (salad, bread and a stew of noodles and vegetables) we exchanged our experiences on the road. It turned out we were not at all the only ones who were enerved by the kids in the villages. Especially the cyclist was absolutely enerved by them and provided Cognac-fueled reenactments of his favourite encounters with them.

Conclusion: There is tarmac in Whakan!