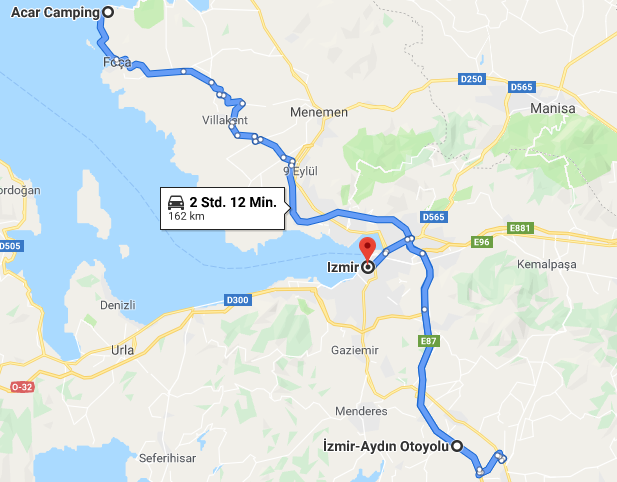 Today was a little different.

As we did not cover that many kilometers on the previous day, the plan was to get further today. So, after packing up our tent and saying goodby to the campground animals, we got back to the main road again. Yesterday evening Ufuk had sent us a message asking about our whereabouts and how we were doing. Also, he stated that if we were near Izmir, we could meet for a drink as he was in Izmir for work. We did however, only read the message the next morning.

So we sent him a reply explaining the situation and offering to come to Izmir for lunch. On the way we checked for replies multiple times but did not receive any. Soon we were on the highway near Izmir and planned to stop soon in order to write to Ufuk about our location and that it would therefore be impossible to meet.

As we were overtaking a small truck, Fabi shouted something with a touch of panic in her voice: “Something is wrong with my bike, I cannot accelerate”. So we pulled over on the shoulder and began to stop. As we were braking, Fabi passed Chris. He could now see that her bike was dragging its chain behind – it had ripped. Once we were stopped, we assessed the situation. One of the chain links had ripped which caused the chain to fall off. Luckily, the chain did not wrap around the read weel. This would have certainly caused a crash. So, the situation, while being far from ideal, was not as bad as it could have been.

The question now was: “What do we do?”. We remembered the words of Ufuk “If you have a problem anywhere in Turkey, call me” and gave him a call. Luckily we had purchased the SIM card which included calls. He quickly answered the phone. After Chris explained the situation, he asked about our location and stated that he would be there in half an hour. So we waited and hoped that he would turn up soon.

We used the waiting time to put the chain in a plastic bag and also to create theories about what would happen next. Where can we get a new chain? How long will it get to get the chain delivered? How much is all this going to cost? etc.. It did not take long and a motorcycle carrying Ufuk and the roommate of his brother arrived on an F650GS (The newer twin cylinder model). We greeted each other and were happy to meet again regardless of the unpleasent situation. Ufuk informed us that he had already called a mechanic to organize a wrecker to get the bike. So all we had to do was wait for the wrecker to arrive.

While we were waiting, a car stopped a few hundered meters away. Slowly, the driver got out and walked towards us while having a smoke. In turkish, he explained that his car broke down and asked if we would be so kind and give him a push. We accepted and therefore had something useful to do while waiting for transportation to arrive. The three men pushed the car while Fabi took care of proper documentation.

Soon after, the transportation for Fabis bike arrived in form of a minibus. The driver was also the owner of the workshop. After inspecting the broken chain, we pushed the bike into the bus. Ufuk and Fabi took the front seats next to the driver and Ufuk’s roommate and Chris followed on the two working bikes.

To get to the workshop, we had to return to Izmir which we had passed 30km earlier. As we got off the highway at Izmir, Chris was waved down by a policeman for a traffic control. However, our friends exchanged some quick words with the policemen and he was let go without any checks or lost time. After some more kilometers through Izmir we arrived at the small garage. It turned out that the owner had closed temporarily in order to come and fetch our bike!

After the girl was out of the truck and on the hydraulic lift, the mechanic got to work quickly. We were told that the F650’s are relatively common in Turkey resulting in a good supply of spare parts – thereby increasing our chances of a quick fix! The only explanation on why the chain had snapped was: too high chain tension. This makes sense as a too high tension can quickly result in a snapped chain, especially on bad roads. However, Chris had checked the chain tension in Austria and determined, that the tesion of Fabi’s bike was too low. Ever since then he had planned to fix it by increasing the tension, but he had never actually done it. Therefore, a too high tension seems unplausible to us. But we don’t know what else could have caused the new (less than 3000km) chain to break. This will probably remain as an unsolved mystery.

As the sprocket cover was removed, a potentially much larger problem was revealed: The nut holding the sprocket thightly in place was not there! Instead the sprocked could move sideways freely if it wanted – even off the shaft! If it would have done that it might have cracked open the engine and thereby destroy the bike. If you wanted, you could say that the broken chain was a good thing as it prevented worse problems in the future.

As a consequence, this meant that two things had to be organized: A new chain (not a problem) and a new nut for the sprocket (possibly a problem). The chain was quickly organized and our mechanic called around to find a replacement part for the nut. As it turned out, the nearest BMW dealer who had the part in stock was in Istanbul. Shipping the part to Izmir would take at least two or three days! But then the mechanic got on his bike to organize a suitable replacement. He was gone for almost one hour. As he returned for the first time, he had gotten the wrong size – meaning he had to go again. Then he had found the right part and could start replacing the chain. The technique to rivet the chain link which closes the chain was a little.. less refined than what we did in Germany as we installed the chain originally. But it worked and the riveted link looked good. Thereafter, the sprocket cover was reinstalled and the chain tension was adjusted with Fabi sitting on the bike. On the final test drive, the mechanic noticed that the handlebars are slightly bent. Also, during the loading process the right mirror broke. As both problems are only minor and it was already late afternoon, we decided to leave them as they were.

Lastly, we had to pay for the repair. We remembered that in Würzburg a mechanic at the local BMW dealer is 110€+ per hour. This made us a little afraid as the guy had worked the entire afternoon just to fix the bike. But in the end the total amount to pay was 925 Lira ~ 136€. This included everything from the pickup to the installation of the new chain. The chain itself was 86€ resulting in a pretty affordable price for the rest. At this price it might almost be cheaper to drive to Izmir to get a new chain installed than to have it done at home.

As it was already late afternoon, we decided to stay in Izmir for the night. As booking.com is not working in Turkey at the moment, the mechanic was so kind to call the manager of a nearby hotel to organize a room at a special rate for us! We owe him SO much for the help and mechanic work he had done for us today,

Sometime during the afternoon, Ufuk had to leave for work. The roommate of his brother stayed with us the entire afternoon and acted as a translator whenever necessary – 1000x thank you to him as well!

As Ufuk was going to stay in Izmir for some more days, we arranged an appointment for dinner. He sent us a waypoint to “Köfteci YUSUF” where we met him, his brother, the roommate as well as the best friend of Ufuk. Then we had dinner together: Several plates with different kinds of meat were placed on the table together with bread and salad. Then everybody takes what he likes. The food was SO delicious. And the dessert, we have no words. Along with each course came small glasses of tea. In the end we were stuffed like pigs. If you ever come to Turkey we only can recommend to go there!! During the dinner, the brother of Ufuk marked several points on the map for us to visit To finish the evening, we went to a small bar at the seaside where we had a coffe. Then we drove back to our hotel where we fell in our beds. Exhausted from the tiring day and the amount of food in our bellies.

A big “THANK YOU” to everybody who helped us or offered help to us during the day!! Without you, we would probably still be stuck on the highway.