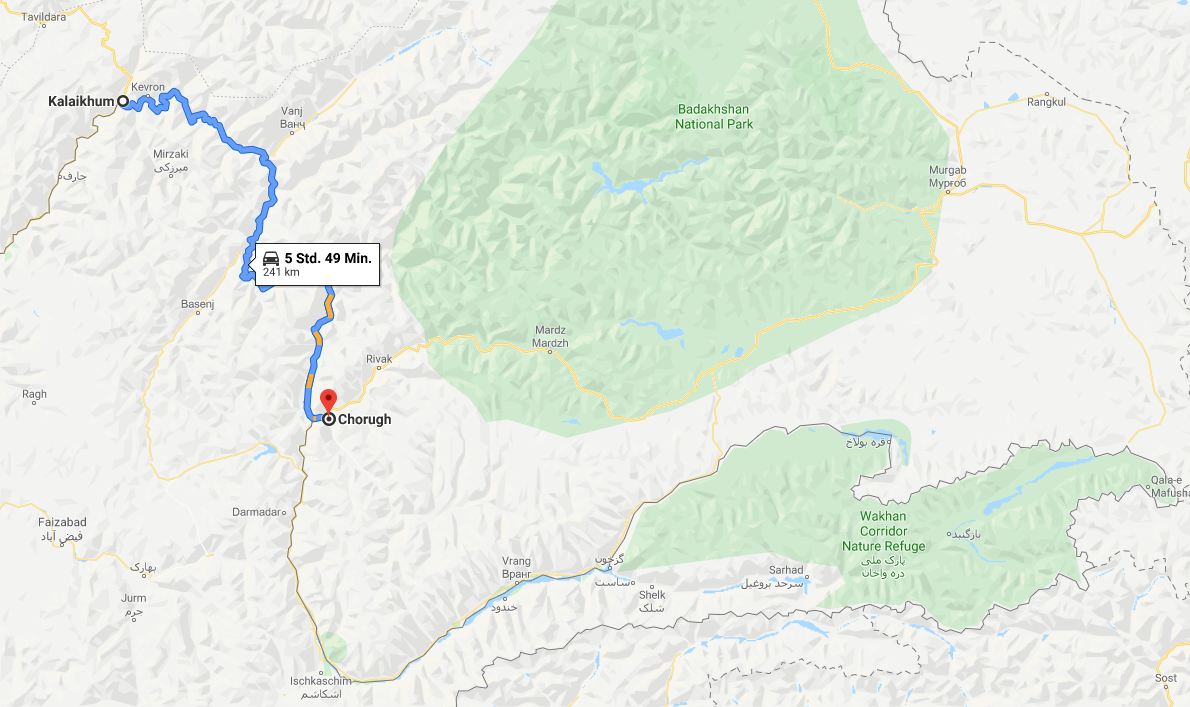 Chris started his daily video the following: There is “good”, “bad”, “shit” and there is the road from Qal’ai Khumb to Chorug. But let’s start from the beginning.

The breakfast in the morning was tasty (finally no more diarrhea!) and gave us an opportunity to get in contact with some of the other guests. There was a group of Czech motorcyclists, the guy from New Zealand and a british lady who was backpacking. After the breakfast we at first went to refuel. For the first time this trip, we refuled out of jerry cans. Asking for “full” wasn’t an option, instead we had to estimate how much fuel we would need. This amount would then be filled in whatever containers we wanted. Luckily Chriss’ guess of 30L was pretty accurate and we two full tanks without any rest. The kiwi refueled together with us but when we got on the road to Chorug he soon overtook us and we lost sight of him in no time. In contrast to all other travellers we had met so far he was not riding some kind of adventure bike but a KTM EXC 500, a pure dirtbike. According to him the weight was around 120kg – amazing! The Czech guys were going about the same speed as we did so we leapfrogged each other multiple times during the day.

The entire day we followed the only available road along the river. Mountains to the left, river to the right. After the nice start yesterday we were curious how today would be.. But as soon as the city of Qal’ai Khumb had ended, the road turned into a nightmare. Sections with bumpy tarmac, sections with big or small potholes, pure gravel and many other variations of said conditions were taking turns in torturing us and our bikes. The average speed was not greater than 30 km/h. Changes in road condition were sudden and the road itself was not very wide. On the right hand side an abyss was inviting everybody who made the mistake of driving too far on the right. The traffic did not really improve the overall situation. As the road is the only possibility to reach the Pamirs the Tadjik lowlands, all traffic goes over it. This includes small passenger busses and also trucks with trailers. On multiple occasions, said trucks came towards us while the road was very narrow and we had to move back in order to let the other vehicless pass. The overall ride was very challenging and Fabi dropped her bike a few times. After about 90 km, we reached the first checkpoint of the day. Here, no registration was necessary and we were dismissed already upon presenting our passports.

A note on the side: Since we had left Dushanbe the weather had been quite nice. Everyday the sky was quite clear with only occasional clouds covering the sun. There was however a noteable difference in temperature. While in Dushanbe riding somewhere resulted in sweaty underwear and t-shirts because of an ambient temperature of over 30°C, the temperature had slowly decreased to the point that combined with the occasional heavy winds today it became chilly with only the hot-weather gear equipped. And we were only at 1500-2000m above sea level.

After the checkpoint 60 more kilometers of bumpy (but way better) followed. While the road was winding along the river we finally had an opportunity to have one or two looks at the magnificent surroundings. Occasionally the valley got wider and gravel beaches had formed on the shore of the river. These sections were never too long and you could always see the valley getting more narrow again in the distance. Also in the distance we could see the snow covered mountaintops of the surrounding mountains.

In mid afternoon we reached Chorug. The city lies at the intersection of three roads. One coming from the north where we came from. The second one leads towards the east and is the official continuation of the Pamir Highway leading to Murghab. Lastly, there is a smaller road towards the south which leads into the Whakan Valley and ultimately also to Murghab. We had to choose on of the two available routes but decided to postpone this decision to after dinner. Taking into account the city’s location it has a remarkable size and infrastructure. There even is a small airport which offers flights to Dushanbe and several other destinations in the vicinity.

For the night we stayed in the Pamir Lodge. It is situated a little outside of the city center and a cozy and spacious place to stay. Most of the guests were cyclists but there was an other biker and also and elder Belgian couple who had rented a Lada Niva in Bishkek in Kyrgyztan. Dinner was home made pizza that was offered by our host. Delicious! While we were eating we had a talk with the Belgian man who told us a little about their experience in Whakan Valley and how they were planning on driving back to Bishkek.

Today was by far the most exhausting day so far and especially Fabi was pissed off seriously several times. But with some Pizza and talking for dinner everything became good again ;).