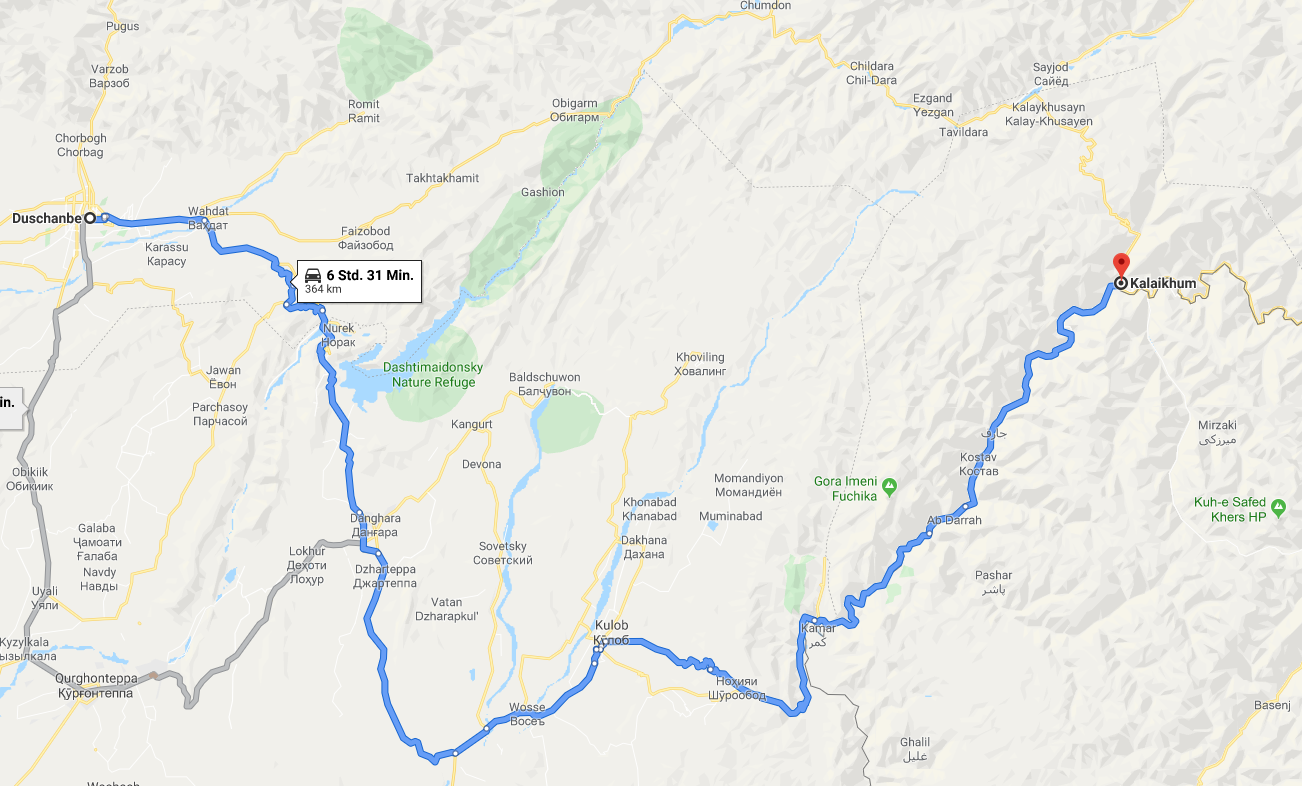 In the morning we set off alone. The Russians and Adrian had already left earlier as they wanted to cover some distance. Starting from Dushanbe, the road was well paved, we filled up with 95 octane petrol at Gazprom. After following the road towards the east for several kilometers, we soon turned south onto a road new to us.

Road conditions were alright, but a lot of smallish villages reduced our average speed. During a break to rehydrate we met a French cyclist who (at least at this moment) wasn’t very pleased with his mean of transportation and envied us a little because of our bikes. He told us that he had met a guy on a Goldwing who was planning on riding the Pamir because he had heard that Pamir was “mostly tarmac”. Interesting, we will see how this statement holds up. The first “obstacle” of the day was the climb onto a mountain pass with a maximum elevation of 3000m. In contrast to the road so far, the road which led uphill was a gravel road – albeit in a good condition without big potholes. During our ascend we were surprised when we overtook said Honda Goldwing. The bike was from Macedonia and they were riding two-up. We also met a German guy in his RV. He was from Hamburg and was on his way back home.

From these two encounters we concluded: If a normal road-orientated RV and a Honda Goldwing can ride the Pamir, then the two of us should be able to do this as well! At the summit of the pass was the first military checkpoint, identical to the ones we had already seen on the northern route. In contrast to the ascending part of the pass, the descending part was paved perfectly. Not “ok, not too many potholes” but more “finished two days ago”. This made the ride downhill a lot of fun! The road continued like this and without paying too much attention, the kilometers just flew by.

In early afternoon, we stopped for a break near the river. “The” river was actually the Panj river which separates Tadjikistan from Afghanistan. It had appeared next to us at some point during the ride and for the last kilometers, the road had been following it. Based on our trip planning, we knew that theview: right side river, left side mountain – would accompany us for the next days. The Afghani-side was similar to the Tadjik where we were: A small road was follwing the river but nothing else could really be seen. The only difference was that in contrast to the Tadjik side, the Afghani road was a dusty gravel road.

As we were taking our break, taking photos and eating, a man walked towards us. Just then we realized that we had stopped about 200m behind a small construction site consisting of a truck and an excavator. Using sign-language we understood that the man was looking for a tire pump. We couldn’t help with a tire pump but we had our small compressor with us. So we accompanied him back to the construction site and saw what he was needing the air pump for: Apparently the digger had a flat tire which they wanted to inflate again.

The only problem now was that no “normal” 12V socket was available. But this wasn’t a big problem that could not be sovled with a little improvising: They simply pressed the 12V plug onto the “+” battery pole and bridged the connection to the “-” pole. This worked fine and after 15 minutes, the tire was inflated again.

We then continued our ride along the riverside road which was only interrupted by small villages. In these we were faced with hordes of children. They always act by the same pattern: Upon seeing us, they started shouting “Hello! Hello!”. Then, they gestured us to slow down and started walking towards the path our bikes were driving while stretching their arms. Then, our “task” was to hit their hands while we were passing by. While it was funny in the first villages it got annoying pretty quickly and also rather dangerous. The kids were paying no attention to the bike itself or anything else, so we had to pay close attention in order to not cause an accident.

About 25km before our goal for the day, the tarmac stopped and the road turned into a gravel road. As the quality of the road was good, we made progress and again overtook the Goldwing which had overtaken us during our break. Soon we reached Qal’ai Khumb. Our goal was to meet up with Adrian and the Russians again so we gave them a call. It turned out they had passed by Qal’ai Khumb already in early afternoon and were on their way to Chorug already. So no dinner with Adrian today.

Finding an accomodation was not a problem. The locals have reacted to the constant stream of “crazy westerners” and several homestays or hostels are available. We stayed at a bigger Homestay right besides the river which was already filled with quite some travellers. From the outside, the homestay was unremarkable but once inside, it was pretty enjoyable. A courtyard was covered by three sides while the fourth side was towards the river with some seating possibilities where you could overlook the river. After dinner we got some supplies for tomorrow and had a small talk with a guy from New Zealand who was on his “way back home” from his trip around the world.

By reaching Qal’ai Khumb we reached the meeting point of both northern and southern route. So, we had made it to the actual “Pamir Highway”. From now on there was only one road to follow, which, tomorrow would (hopefully) lead us to Chorog, one of the two bigger cities along the Pamir situated at 2065m.