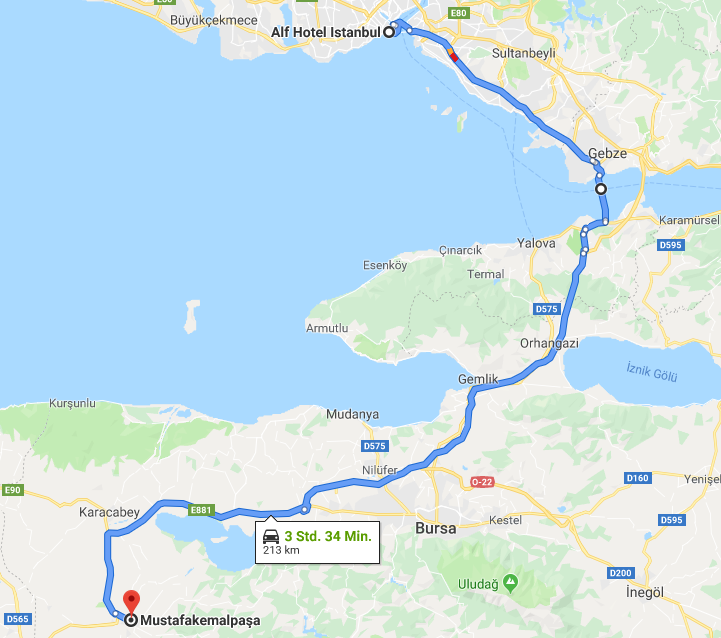 After two days in Istanbul, it was time to continue on our route. The plan was to head straight for Cappadocia in order to watch the famous hot air balloons as well as the unique landscape.

But before going there, the plan was to get a phone holder for Chris. During the last days he had used his phone as secondary gps in the map slot of his tank bag. As it turned out, it acts as a greenhouse when exposed directly to the sun. This resulted in an automatic shutdown of the phone due to overheating multiple times. With the phone getting cooled by the wind, the hope was that this would not happen again.

Luckily we saw that there was in fact a “Polo Motorrad” store in Istanbul – the very same chain as we have in Würzburg! In order to reach either Cappadocia or the Polo store we would first have to cross the Bosporus to Asia. There is a new tunnle which would be easy to reach from our hotel. However, only cars are allowed in there. So this was not an option. Taking one of the two bridges would require us to drive a long distance through the city. After our last experience with the Istanbul traffic, we were not too keen on that either.

Luckily, we had seen that there are multiple ferry operators transporting passengers and vehicles between the two shores of the coast. On top of that, the ferry terminal was easy to reach from our hotel. So we could avoid the city traffic.

When we went to get our bikes from the Otopark, they were still there. However, a bird had decided to poo on the peak of the Red Baron and Black Beauty had apparently been the favorite place of a cat. After sorting out a pricing issue with the owner (We were initially told that it would cost 120 Lira to park our bikes, but when we went to get them they wanted 180) we rode the bikes to the hotel and threw on our luggage.

The way to the ferry was short and easy to find. A price of 6 TL per bike for the ferry was more than acceptable, considering the toll of 3.50 TL for the bridge. Fabi used the waiting time for the next ferry to have a quick nap.

On the ferry with us was a third two wheeled vehicle. A young man riding a big scooter. As we were leaving the ferry on the Asian side, we saw that he was standing on the side of the road, signaling us to stop. We stopped and he introduced himself as “Ufuk”. He asked about our plans for today and in general. As he heard, that we were heading to the Polo store, he offered to take us there. We willingly accepted and rode there together. Driving in the Turkish traffic was still a bit alien to us, but we slowly got used to it. We soon arrived in the “motorcycle district” of Istanbul. Here, all kinds of stores concerning motorcycles can be found. They offer a wide selection of brands for both bikes as well as equipment. So a lack of choice cannot be the reason for the high number of people riding without ANY kind of safety equipment.

After showing us around the district, Ufuk asked if we had time for a coffe. As we were planning on going shopping for said phone holder anyways, we happily accepted. We were then introduced to the motorcycle cafe which was just one corner away. There we got to know some of Ufuks friends and were introduced to the motorcycle culture of Turkey. One of the key elements of it is, that bikers help each others out whenever they can. As a consequence, Ufuk gave us his phone number along with the words: “If you have a problem anywhere in Turkey, just call me”. We thanked him and hoped that we would never need it.

As we were talking about our planned route, he suggested we extend our trip further to the south to the cities of Izmir and Antalya in order to see some corners which are a must-see if you are in Turkey. He also stated he had a friend in Fethie who we could meet when we pass there. From Antalya we could continue to Cappadocia.

All in all he said, this would make the trip much more interesting while costing only around three days. Convinced by his words, we adjusted our heading towards southern Turkey.

Chris then had a look at the phone holders that were offered in the Cafe. He decided on a simple mount which holds the phone by grabbing the four corners of the phone. Quickly, the holder was mounted to his handlebars and the price (155TL – 23€) was paid. We got some more oil for our Scottoiler and after some more talk at the cafe we were ready to go after only three hours. But the time was well spent as we hat several new aquitances in Istanbul. As we left, Ufuk told us that he would like to come with us until Izmir but due to work this day this was not possible. However, we was going to be in Izmir the next days, maybe we could find an opportunity to meet once again.

With a new phone holder, a new navigation app (Maps.me) and a new plan we set off towards a second ferry in order to save time. Ufuk had recommended us to have lunch at the ferry terminal as the food there was supposed to be delicious. However as we were waiting for the ferry we were unable to find the entrance. So, no food for now. Instead, we settled with sandwiches.

After the ferry, we got on our way towards Izmir. However, stopping for a coffe had cost us quite some time. So, we chose to stay in Mustafakemalpaşa for the night. With the help of locals we found a nice and affordable hotel and got takeout dinner: A menu consisting of two Pizzas, fries, onion rings and chicken nuggets. Quite a strange combination but SO tasty. We weren’t able to finish all the food and kept the second piza for tomorrows lunch. 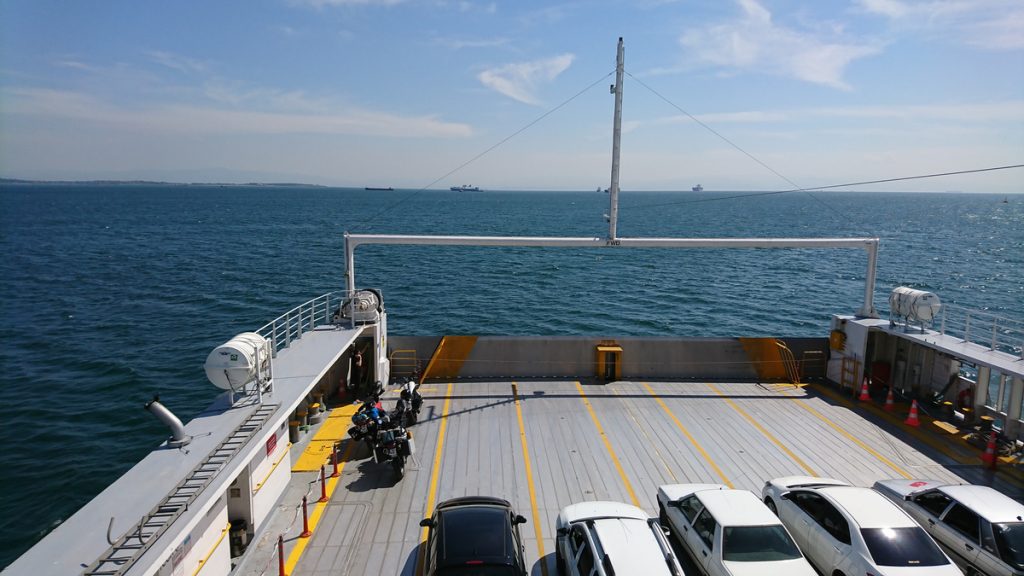