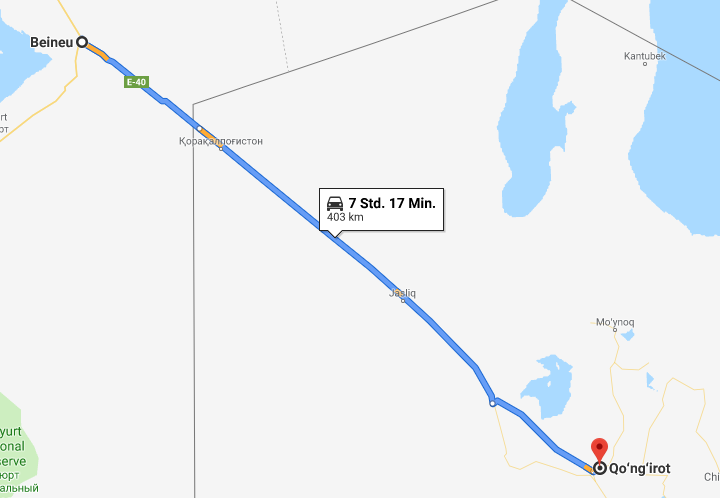 We took off early in order to get some more of the less hot morning hours. Directly after exiting Beineu, the road was drastically different from yesterday. No more perfect tarmac and smooth rides. Instead, we were greeted by deep sand, unclear paths and the main road still being under construction. We thought we would be clever and ride on the almost finished road – but it turned out that the road was interrupted every few kilometers. So, we had to get back to the “fallback” road. In between lay about 200m of uneven terrain. Dust, sand, gravel etc. On this occasion, Fabi dropped her bike for the first time. It was only a drop at slow speed into a small sandpile, so nothing too bad happened.

Just before the border to Uzbekistan we filled up completely. We had heard that getting petrol would be more difficult from here on. The border itself could be spotted easily from kilometers away. Reson for this was the long, long queue of trucks and cars waiting to enter the border checkpoint. As we queued up, the drivers of the cars signaled us to skip the line and head to the front. They did not have to repeat this invitation. The actual gate of the border was closed. Unsure about the reason we walked to the gate and translated “Is the border closed?” to russian with the help of Google Translate. After Chris showed the phone to one of the guards, he replied: “Motorcyclists? Tourists?” – yes, yes. That did the trick. The gate was opened and we were allowed to drive inside – skipping 20 more people that were also waiting. Likewise, we got the “Express” treatment at the passport check as well. Lastly, some luggage check followed. After denying that we were carrying drugs or weapons, we were allowed to leave Kazakhstan.

At the Uzbek border there was an other queue of trucks and cars. Knowing how things work around here, we took the narrow path next to the queue and drove to the front. Again, being tourists gave us the speedy treatment. The usual checks were conducted quickly and we were through the them in no time. At the exit however, we had to turn around and drive back because a border guard forgot to write down our passport and “moto passport” numbers in some book. With this out of the way, we entered Uzbekistan.

Previously, we had red on the Internet that the street leading away from the border (there is only one) is in horrible condition. That was true. Accordingly, we had 140km alternating between bumpy road with deep potholes, wavy dirt road and completely destroyed tarmac road. It was flabbergasting to see the amount of cars and trucks going over this horrible, horrible piece of road. Even driving slow there was no way to avoid every pothole.To make matters worse, the road just would not stop – when going slow it takes a while to cover 140km.

On multiple occasions we had to stop because something was hanging off of one of our bikes. The jerry cans were dangeling around near the rear wheels several times. 5L of petrol held only by two elastic straps maybe isn’t the best combination. This problem could be solved by filling the petrol in our tanks. What we could not fix however was the nozzle of Fabis’ Scottoiler. All the bumps had caused it to fall off completely – so the tube was just hanging around and the oil dripped on the wheel. Additionally, the tube then got caught by the rear sprocket – so we had to stop, loosen the reax axis, get the tube out and tighten everything again. We got pretty fed up by this situation. But there was nothing really we could do about it. In either direction there was bad road and around – there was just wide, endless nothing.

As the hours passed by, so did the kilometers. Finally, after several hours the road improved and we could maintain a speed of 100 km/h. Soon, the first bigger building appeared on the left hand side: A cafe in the middle of nowhere. On the entrance we could see that several other travellers had already been here. We had a late lunch and continued towards the Aral lake.

Pretty late we arrived in Qoʻngʻirot which lies 80km south of the former shore of the Aral lake. Here, we wanted to look for a place to stay for the night. Unfortunately the available options weren’t exactly inviting: the only guesthouse in town wanted 20$, then 15$ to allow us to sleep on their couch in the “home gym”. Finally we found some restaurant/cafe which was also listed in the “Accomodation” category of OSMand – here we could sleep in one of the “private dining rooms” and also had the possibility to have a hot shower. Not that nice but it seemed better than wildcamping somewhere (at least at that time).

During our search for a place to sleep we also encountered the strange Uzbek financial system: ATMs aren’t really a thing. Instead, the only real possibility to get local currency is to exchange US Dollars with some money changer. These can normally be found on any bazar. Surprisingly, the exchange rates are pretty close to the official market rates. Still, going to an ATM is way easier and feels a lot less shady than this method.