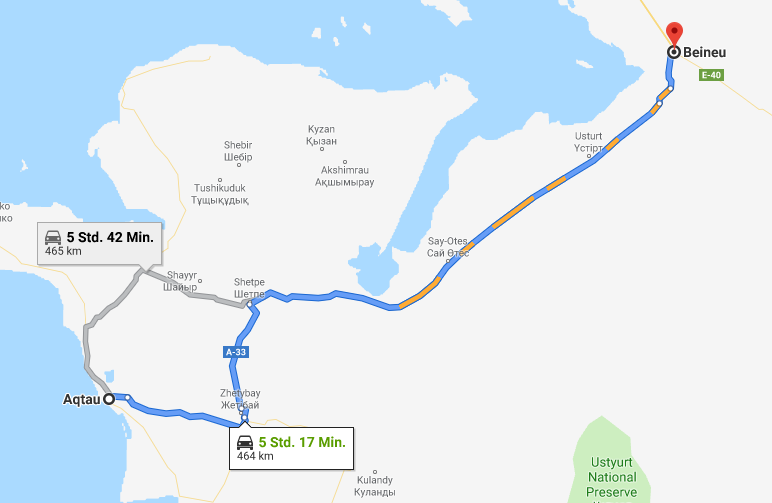 In the morning we woke up before the others. As our plan was to get a Kazakh sim card before leaving the city, we took care of that at first. Second stop was a petrol station to fill up for the day. During yesterdays dinner, we had discussed the route for the day. We knew that there would not be too many petrol stations along the road with a stretch of around 300km with no petrol at all!

Petrol in Kazakhstan has to be paid upfront. You go to the counter and pay whatever amount you want. Luckily, if you pay too much, you get change back. So we just handed the cashier way too much money and could fill up completely (including our jerry cans) with no problem. A welcome surprise was the price of the petrol: below 0.50€ for one liter of 95 octane! As we were done with refuling, the other three turned up and did the same. When they were done, we got going. Adrian went to get a sim card as well while the two Germans took of to Beineu ahead of us.

After leaving Aqtau we were greeted by the Kazakh steppe. Dry plain as far as the eye could reach, only disrupted by occasional groups of camels, sheep or horses. Yep, camels! We had seen some during yesterdays’ ride to Aqtau, but today there were SO many of them. They were standing next to the road minding their own business. We were wondering if they are wild, but then we saw that they had something hanging around their neck. So they probably have an owner. The only question is: How does he find them? During the day we passed through maybe two bigger villages, besides that there was just.. nothing. Don’t they just wander off?

The weather was perfect. Most of the time there was not a single cloud visible. As a result of this we were slowly cooked while we were riding along. The thermometer peaked at 38°C. To cope with the high temperatures, at each stop, we soaked our shirts with water from our backpacks. That really helps – but only until the water has evaporated, then it is as hot as before.

During one of our breaks a local car stopped on the same parking lot. The driver was a man who was on his way home together with his family. He spoke very good English and as we said goodby, he gave us a gift: some Kazakh chocolate! Unfornunately, the high temperatures did not help too much in keeping the chocolate solid :/

In theory, we should have been able to make it to Beineu without using our 5l of extra fuel. But the entire day we had either strong head- or sidewinds. This ruined our fuel economy and we needed the extra fuel in order to reach the next petrol station.

As we approached Beineu, we got a message from the others. They told us in which hotel they were (the only one in town) so we could meet up again. We had dinner in the only place we could find. Here, we got some Shashlik with salad. Nothing fancy but it did fill the stomach.