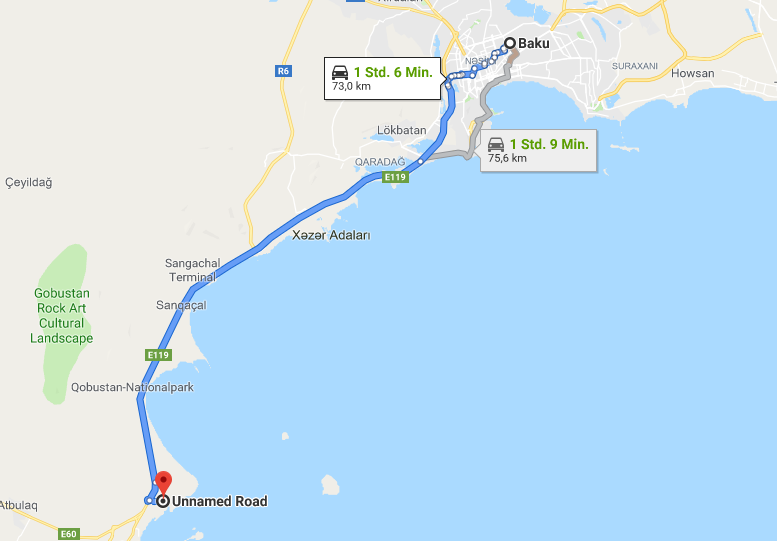 Only very rarely, things take shorter than one would expect. Luckily, our ferry was one of these rare occasions.

In the morning, we awoke only to find the Omanis packing their stuff and getting ready to leave. This was odd because initially they had told us that they would stay until tomorrow. The leader of the club told us that they got word that their ferry from Iran to Dubai would leave sooner than they had expected. In order to get to the ferry on time they had to leave today instead of tomorrow.

So, we also packed our stuff and got ready to leave. During yesterdays’ dinner they had told us about their shopping trip to the big bazar. There they had purchased gifts for their friends and families. That sounded nice so we got the coordinates from their driver. When everything was packed, we pushed our bike out of the driveway. By now we were somewhat used to the amount of attention the bikes of the Omanis tend to catch. What took us by surprise was the amount of luggage they had. When we first met them, we already noted that they were pretty packed. But during their shopping trip yesterday each of them had bought an additional trolley which was now strapped on top of the luggage mountain.

We inquired what we should pay them for the accommodation and food during the last two days but they declined. One of them called it “the biker spirit”. Very kind, we will pass this favor on to other travellers. After a final goodby, we went different paths.

The bazar was easy to find as it lay right next to a major road and was.. gigantic. It lay outside of the city in the middle of the desert. First task was to find a suitable parking space in the enormous parking lot. As we had all our luggage with us, we were a little concerned about something going missing. There was a small police station right in the middle where we were allowed to park. Safety guaranteed.

Our imagination about what the bazar would look like was a little different from reality. No men in traditional garments selling spices and fruit. Instead there was a multitude of small and larger booths selling all kinds of household items. Clothing, shoes, TVs, chairs, tables, phone accessories, kitchen items….. This list could go on forever. What was missing (at least in our opinion) were suitable gifts. Did the Omanis buy water boilers for their families? After walking around for more than one hours, inhaling the wonderful plastic smell, we finally found a single booth selling classic gift items.

By then we were pretty exhausted and overwhelmed by the sheer amount of offered products that we decided to end our shopping trip. Overall we did not buy THAT many things: Fabi purchased two small souvenirs and Chris got himself a pair of slippers. Slippers are an essential item which we definitely recommend to carry during such a trip.

With the point “Shopping” completed, we were unsure how to continue. Chris phoned the ferry ticket office to get info about the approximate arrival of a new ferry to Kazakhstan. To our both surprise we got pretty concrete information: The guy from the office told us that the next ferry would probably arrive this evening or tomorrow morning! Once again a pretty short notice. He also told us that in order to get on the boat we had to be in the port this evening. As we had nothing else to do anyways we decided to ride to the port now. This would give us more than enough time to purchase a ticket and (hopefully )to make ourselves familiar with the procedure.

Despite the fact that we always talked about the ferry from Baku to Aqtau, the ferry neither departs nor arrives at said ports. The port in Azerbaijan is actually located in Alat, around 60km south of Baku. In Kazakhstan, the ferry arrives in Kuryk which also lays south of Aqtau. This meant that the ride to the port was around half an hour along the sealine on a three lane road.

Upon arrival at the gate of the port we had to present our passports and were registered in some logbook. The guard then pointed us to the direction of the ferry ticket office. A little unsure we slowly rode in the general direction he had pointed. It became clear, that motorcycles and other travellers are only some additional cargo. The main cargo of the ferry are trucks. So many of them were standing around. We arrived at the end of the “road” and looked around. To our left, something looked familiar from photos we had seen on the Internet, so we rode there. Turned out we were right. After some more trucks, several containers were standing on the right hand side. This had to be the ticket office! We also noted that there were two motorbikes parked on the left hand side with their riders sitting between them in a small camped.

We parked our bikes next to the containers and went to get our tickets. The infrastructure was simple but everything necessary was there: The ticket office, a bank where the tickets had to be paid in cash, an ATM to get said cash, a supermarket and a container with toilets. Lastly there was some pipe to get cold water.

At the office (no entry permitted, hand your documents to the clerk through a 20x20cm window) we got a slip to present at the bank. At the bank we then paid 180$ per person + bike. With the bank receipt we then received our tickets.

As we got back from the ticket office, we met one of the two bikers and were greeted by a “Servus”. After some smalltalk, we parked next to the two. Their names were Alois and Eisi and they were from Ebersberg just north of Munic. That’s not that far from Würzburg! Their trip was from home to the Baikal lake and home again, albeit without the Pamir detour. They had arrvived already yesterday and slept between their bikes last night. As we were talking, they told us about some mud volcanoes which was situated about half an hour away and which (according to them) would definitely be worth a visit.

That sounded cool so we left some of our luggage with them and rode of to see the volcanoes. Back to the main road, two kilometers into southern direction and off into a small village. The locals there were already familiar with strangers and as soon as they saw us they pointed in the direction of the volcanoes. As soon as we turned off the main road, tarmac stopped and we had a dirt/gravel track. Besides our mud adventure in Georgia this was our first off road adventure. Especially Fabi wasn’t too keen on going fast, but after some kilometers we had gotten used to it and cruised along at 60 km/h. That was fun! One last quite steep climb and we reached the top where we were greeted by small volcanoes out of dried mud. Courious to find out more, we had a walk around and climbed some of the mud mountains. The area lay on top of a small plateau, so we had a nice view on the surrounding landscape.

After concluding that the volcanoes made “blob” every once in a while but nothing else, we got back on our bikes and headed back. Before going to the port we wanted to grab dinner and some supplies for the duration of the passage. Therefore we stopped at a petrol station and some small fast food booth. At the petrol station we bought water, snacks and some beers. The owner of the food store was delighted to have some foreign customers and went all out to accommodate us. He took out the table and two chairs from his store and placed them in front. Then he served us tea while we were waiting. We waited quite some time and when food was ready, the sun had already set. So we had to ride back to the port in the little light that was left. Luckily it wasn’t that far.

At the gate we had to wait until the two trucks which arrived before us were done, then we got registered one more time and could finally enter the port again. As we were riding to the ferry terminal and Alois & Eisi, the lights of a motorbike came towards us. As we passed, the bike turned around and followed us. It turned out that Alois was worried about us because it was already late and we had not returned yet. That’s too kind!

One nice aspect of the port was that there were floodlights everywhere. So, we did not have to eat in total darkness. The other two invited us to their table. As we only have one chair, Alois gave his chair to Fabi and sat on one of his sidecases. The food we had gotten was a little different than what we had expected. But together with the cold beer from the petrol station it tasted acceptable. Alois and Eisi were delighted that we had some surplus beer which we shared with them. Apparently the small market in the port does not sell alcohol. They also told us that the guards don’t like if you drink alcohol. So we had to hide our beer after each sip.

At 11pm we got ready for bed. Pitching a tent sounded a little over the top, so we copied the method of the other two and just slept on the ground in between our bikes.