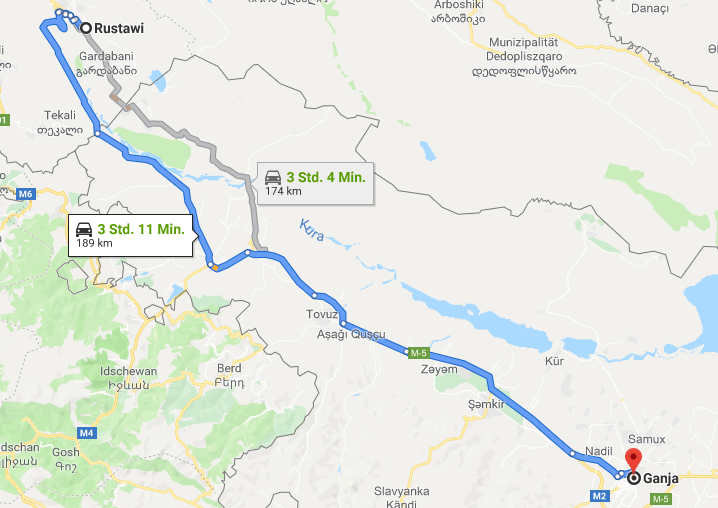 In the morning the stomach of Chris felt better again. As there was no breakfast we were able to pack our bikes quickly and got going. The ride from our hotel to the border was short and we got there quickly.
As we still had some Lari, we stopped at a small supermarket to buy water and some snacks for the day. As we were organizing our shopping, a man approached us. He introduced himself as Zafar and when he learned that we are from Germany he told us about his niece who lives in Germany. He also gave us a recommendation for a hotel in Baku.

As we were talking to Zafar we saw a big group of bikes pass by on the road. As the road only led to the border they also headed there. Once we said goodby to Zafar we covered the last kilometer to the border. Exiting Georgia was a matter of minutes. The entry into Azerbaijan was multi-level process. At first both of us got a laminated card with a “1” on it. Then we slowly drove through an area where apparently our bikes were photographed. After that we got to the actual passport check.

A border guard portended us that we should pass the normal queue and should park behind the bikes we had seen earlier. They had formed their own queue. By their numberplates we got to know that they were from Oman. As we were waiting in for the passport check we got into a conversation with them and they told us about their trip, the end of which they had almost reached. Through Azerbaijan they wanted to cross Iran and then take a ferry home. During the last four weeks they toured Europe and had covered over 20.000km by doing so. Breaking this down into daytrips gives an average of at least 718km per day but they told us that their record was 1600km during one day! The bikes they used for this untertaking were two Honda Goldwing, a Kawasaki Vulcan 1700, a BMW R1200GS and a Honda Africa Twin. What a mixture!
Meanwhile the immigration process was progressing slowly. Our passports, vehicle papers and visa were checked intensively. After that was done, it turned out that Fabi did not get registered by the cameras earlier on. So she had to go back and pass by the cameras one more time. This time she got registered. We then asked the guard where to go next, to which he replied “finished”. So we headed for the final check. Here we were promptly turned around because we had forgotten step nr. 2534.4 (or something similar). It turned out that an other border guard had to wave a small barcode we had received in front of a scanner in order to confirm that our baggage was checked (at least theoretically). Then we were finally good to go.
At the next petrol station we met the Omani bikers again. We talked a little more and exchanged stickers. The locals were fascinated by their big bikes and were queuing up to take pictures on the Goldwings and the Kawasaki. We were invited to join them to Baku but declined because of the distance (And maybe also because we may have been afraid of their potential riding style).

Instead we slowly continued on our way to Ganja. Like in the previous countries we needed some of the local currency in cash. So we looked for an ATM. The sign of a relatively big petrol station read “ATM” but it turned out that that means something else.
As we were stopped a gas station attendant started to talk to us. His English wasn’t the best but he managed to point us to Ganja and also to some national park nearby which he recommended for us to visit.
In Ganja city we finally found a real ATM with cash inside. Thereafter we headed to our hostel.

Some days ago, Chris had contacted Kevin (https://dejavu.voyage) who has a route similar to us and was also travelling in Azerbaijan at the moment. Chris wrote him where we were staying, and sure enough some hours after we arrived, he also arrived on his red F650GS!
He told us about a village founded in 1819 by German resettlers which was formerly called “Helenendorf” and is now known as “Göygöl”.
Kevins’ plan was to drive there and continue to the national park for a short view around before the sun would set and asked us if we wanted to join. Fabi declined but Chris went for a ride with Kevin.
First task was to get 95 octance petrol for Chris. Thanks to Kevin being fluent in Russian, we quickly found a petrol station with the right benzin.
After some more asking around, we arrived at the school of Helenendorf.
An old man who was apparently the caretaker of the building was delighted to have a German tourist fluent in Russian visiting and gave us a tour of the building.
Right behind the schoolhouse lay the church. Being in the town was almost surreal the houses as well as the church could directly be placed in a village in Germany without standing out.
It should be noted that there were several posters explaining certain aspects that were bilingual in German/Azerbaijani.

As the weather was not looking too good, we decided to skip the national park and instead head back to the hostel in Ganja. There we met up with Fabi again and went out for dinner in a small Pub/Restaurant. Again the fluent Russian of Kevin helped immensely as he asked the waiter for recommendations and got an explanation on the ingretients and taste of every dish. As a result, we had a variety of amazing food. soup, some innards, grilled meat with a delicious gravy, a cheesy dish with more cheese and a big salad.
Lesson learned: If you travel eastwards it is beneficial to speak a little more than just three words of russian.