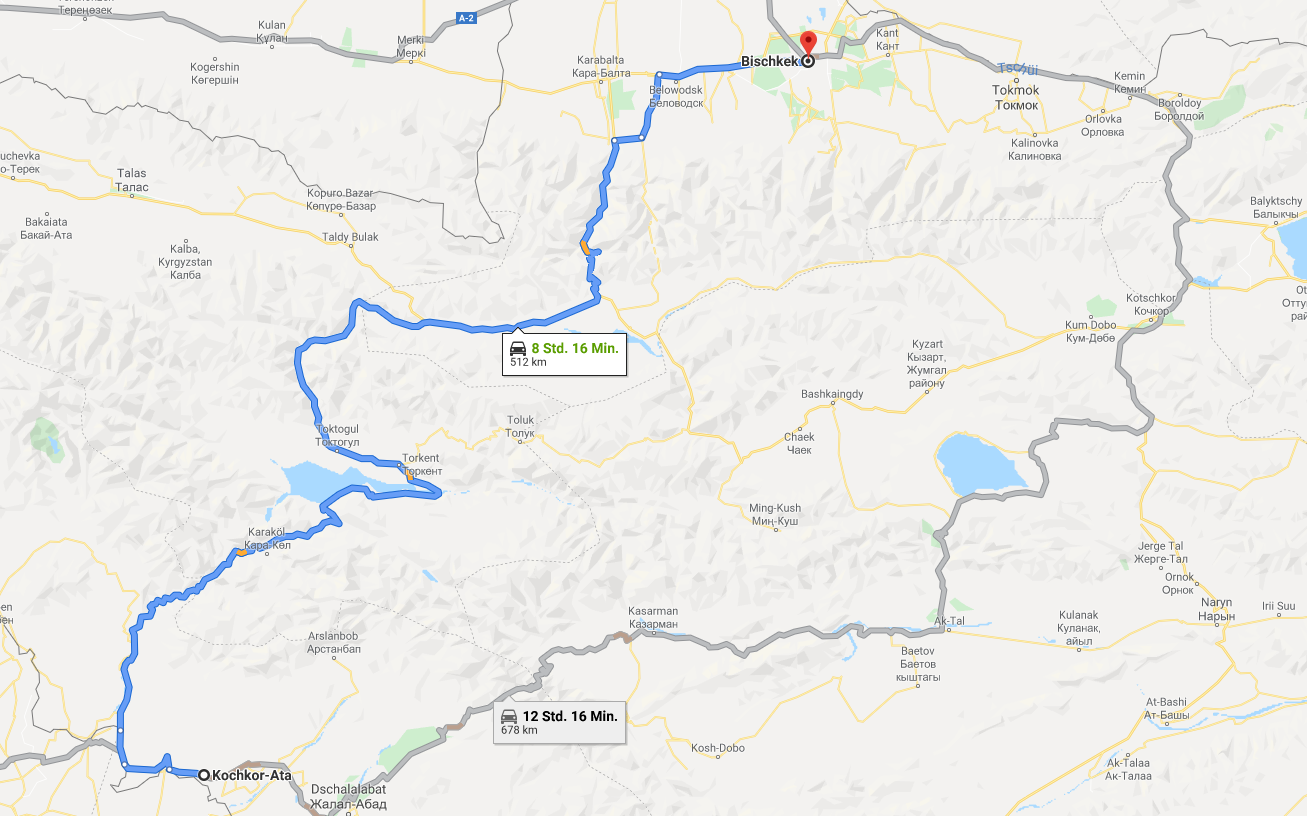 We woke up pretty early and were ready to go at 8:30am. As the owner of the hotel still had the passport of Fabi, we had to wake her up before we could leave. She wasn’t exactly delighted to see us that early, we however were delighted to be on the road reasonably early.

The road to Bishkek at first lead on a curvy road along some river. No villages lay along the road and the tarmac was in good condition so this section was really fun to ride. At the end of said road lay a toll station which let us pass without giving us a ticket. Shortly afterwards we met an elder couple on an R1150GS on a big Europe+ trip. After exchanging some words we rode on. After Pamir we had descended to below 1000m elevation and had stayed there so far. Now the road was climbing again until we reached a high plateau at over 3000m.

Here we saw more examples of the classic kyrgyz nomad life. Occasionally there were gatherings of yurts, construction trailers and 4×4 vehicles forming some kind of settlement. Part of this settlements were always a few dozen horses and if they were situated next to a road also small booths selling dairy products. Along the road there were also multiple beekeepers who worked on their beehives standing near the road while also selling honey to people passing by. At one of those Chris bought a jar of honey which he wanted to take home with him.

As Biskek lies at a height of 800m we had to descend again. The descending road was a combination of hairpins, tunnels and roads through narrow mountain valleys. At the bottom there was another toll station. The guy inside was asking for a ticket. What ticket? At the previous toll station they had just waved us throught? After some back and forth he produced some kind of “no ticket” receipt which we then paid. The last 100km to Bishkek were a constant construction site. One half of the road was zoned off while the traffic was routed over the second half. This was combined with speed bumps which again produced the “oh no my car is made of raw eggs” behavior. Bugged by this Fabi was occasionally pulling on the gas a little too much which led to us getting stopped by one of the frequent speed controls.

After 30 minutes the two police officers apparently got fed up and told us “We help you, you can leave”. So, with a time loss of 30 minutes we were back on the road and strictly adhered to the speed limits in order to avoid such encounters in the future. In Bishkek we had located a cheap hostel wher we planned to stay for two days to have a look at the city. The first point of interest we visited was the brewery and beergarden “Steinbräu” which is essentially a German-style beergarden in the middle of Asia. They brew their own beer and have a selection of German dishes on their menu. Sadly the “Schnitzel Wiener Art” was out, but the steak from the pigs neck was delicious as well. The homemade Steinbräu beer was acceptable, nothing too fancy but close to a German Pils.