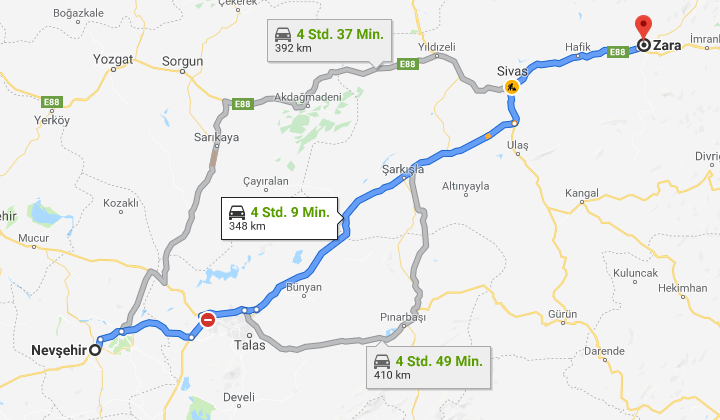 After reaching Cappadocia yesterday, the next big goal on our trip was the ferry in Baku. There was one thing we should sort out before taking the ferry: A valve clearance check for Fabis’ bike. We had planned on doing one before starting our trip but did not manage to do so due to a lack of time. On the Internet Chris had found the address of a motorcycle workshop in Tbilisi called “Bikeland”.
Conveniently, our route led through Georgia and Tbilisi so we could incorperate the workshop stop into our itinerary.

Our room included breakfast. So, in the morning we stumbled on the terrace where we assumed the breakfast would take place. But there was nothing organized and also, we could not see any other guests. Quickly, we were approached by one of the employees who told us to sit down wherever we want in order to start the breakfast (thanks to Google Translate at this point). So we sat down on a table with nice view over the surrounding landscape. 30 seconds later the lady appeared from the kitchen carrying a tray with over a dozen small bowls on top of it. They were placed on our table together with bread. Additionally, we got a fresh omlette. Now the table was covered with small bowls each filled with a different kind of food. There were various cheese, sausage, olives, honey, multiple jams, … This list could go on almost forever. Having tried everything, we were not sure if we should adjust our suspension for the increased load. 😉

Before heading to our goal for the day, we at first headed for a landmark known as “valley of love”. We ended up on a viewpoint where you had a view over said valley. There we speculated where the valley got its name from because there wasn’t really anything that looked romantic in any way.

After having a look around and taking some pictures for social media, we entered todays goal, the city of “Zara”. The ride there wasn’t very eventful as it mainly consisted of straight roads and bugs dying on our windscreens. One exception were the remains of a dog which had died next to the road – Fabi was fascinated!