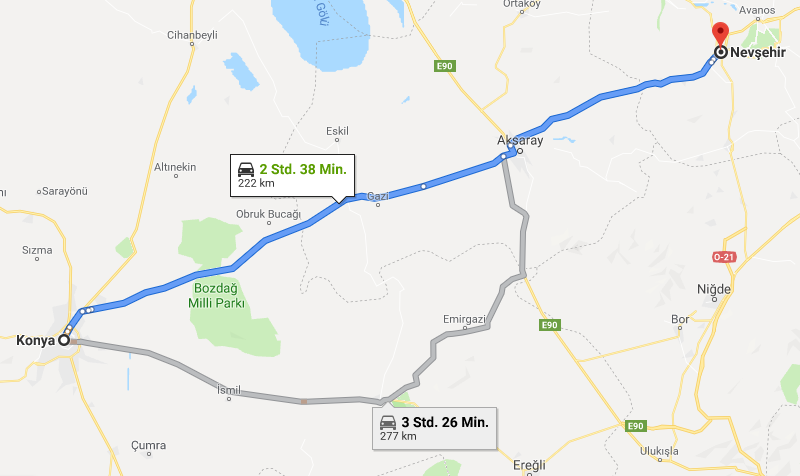 As we had a pretty long day yesterday, todays trip was relatively short with just around 220km. In the morning, Chris mounted the actioncam to his helmet and at the same time, realized that he had forgotten the remote control at home! As a consequence, we will probably use the camera a lot less. But most of the time the wifi is not good enough to upload any video so it does not matter that much.

As can be seen from the route on top of the post, the ride was only on straigth roads and therefore relatively boring. In contrast to the scenery we had ridden in during the last days, we now saw wide plains used for agriculture. Also, there were now fewer fuel stations than in the regions near the seaside. While riding there, we sometimes got the impression that every second building next to the road was a petrol station. Now, there were long stretches (Ok, mostly less than 50km) between petrol stations. As a consequence of the agricultural usage, there were SO many insects and other small animals flying around. Naturally, some of them had their life ended by a sudden collision with a helmet moving at 100km/h. Fabi was pretty disgusted, commenting each new “splat” with an “ewwww”!

As we had not yet booked an accommodation for the night, we stopped at a petrol station that looked as if it was out of service. The building which normally contains the market and the cashier was empty. A second building besides it only consisted of bricks and had no door or windows. As we were discussing our options, it turned out the the petrol station was in fact not closed. The single petrol attendant came out of the “shop” and approached us. He greeted us and signalled that he would like to invite us in for a chai (tea). As we were not in a hurry, we accepted and followed him into the building. It turned out that it was not completely empty but mostly. In a small side room, there was a sofa and a small TV as well as a small stove on top of which a pot of tea was sitting.

Both of us got one of the typical tea glasses and the man opened a new package of chocolate wafers to offer to his guests. As the possibilities of “communicating with gestures” are quite limited, we soon switched to using the Google Translate “conversation” feature. Using this, we had a small conversation and discussed topics like the relation between Turkey and Germany, tourism and public holidays in Turkey. During the breakfast, we had seen that today was some important day as the breakfast television program showed pictures of Atatürk and preparations for parades etc. With his usage, we found out that Turkey was celebrating the 100th anniversary of its idependence. On the 19th of May 1919, the Turks started the liberation war during which they achieved independence of the influence from foreign countries. As we asked if the gas station was actually open, he told us that yes, it was open but the only fuel available was diesel which results in a lot less customers than a regular petrol station has. After a glass of tea and some waffles, we said farewell and rode on without having booked a hotel. So we stopped again 5km further down the road and quickly finished the task we had started an hour earlier.

Slide in: fueling in Turkey
As we fueled up for the first time in Turkey, we were irritated: Getting gas on your own is a big No-No. Instead, some attendant at the gas station at first registers your numberplate. Then, the fuel nozzle is unlocked and he can start to put fuel into your tank. We asked our Turkish friends about the reason for this strange process and they explained that it is an obligation imposed by the government in order to prevent or track terrorism (around three corners). When the refueling is done, you either pay the attendant in cash or you go inside to pay by card. Then, you receive two receipts, one of which you have to give to your attendant.
Our numberplates from the city of Würzburg have the sortcode “WÜ” on them. The umlaut “Ü” is apparently not on the keyborad used to input the numberplate. This resulted in verious different but all wrong numberplates being entered. “WUE”, “WU”, … Some attendant told us: “I just entered something so the system would shut up”.
Also, besides petrol and diesel, you can purchase liquid gas at almost all petrol stations. The reason for this is simply that liquid gas is cheaper than petrol (around 33%) which results in the modification of many cars to run on liquid gas.

Soon we arrived in Nevşehir which lies next to Göreme, the center of the geographic region of Cappadocia. Cappadocia is mainly known for two things: Its unique landscape shaped by the “fairy chimneys” and the regular launch of a gigantic amount of hot air balloons every morning.

So, after arriving at the hotel, we unloaded our bikes and rode to a few points marked as “panoramic view” marked on our map. The views were truly amazing. Sadly, Chris decided not to take his camera so our phones were all we had. Even if we had a proper camera, it would be impossible to capture the impression of viewing it in person. As the sun was setting, we stopped at a panoramic viewpoint which lay practically next to the road only slightly elevated. One very nice contrast we observed compared to what we would expect from Europe was the way this very special landscape was used. Normally, we would expect the area to be off limits for motor vehicles and only to be accessible by food (after paying the entrance fee of course). But while the area around Georöme is a national park, that’s about it. You still can do whatever you want. As we were looking around, we were seeing multiple places where people had parked their cars and were just in the process of starting their barbecue. As could be expected, downsides exist. For example, the point where we were parked was covered in broken bottles and bottle caps from previous visitors. Nevertheless, the scenery was simply breathtaking and we were sad that we were only going to stay for one night.

We decided to grab some of the delicious turkish streetfood in the center of Georöme for dinner. Finding something to eat there is no problem as the city is very touristic and, as a consequence, has looots of restaurants etc. We ordered some kebab at a small restaurant and had waited for its preparation. Suddenly, we saw two familiar faces: The two German Husqvarna drivers from Bulgaria! They were as surprised as we were. As they had planned six months for their trip in contrast to our three, we had not anticipated to meet them again. But it looks like our detour along the Turk coastline had delayed us long enough for a second meeting with the two.

Amused, each accused the other of following them. But it turned out we had taken two completely different routes. As our food was ready by now, we went for a walk in order to find a place to eat, scrapping our original plan (for a better one). After having eaten, we were kindly invited for a chai. While we were sipping on our tea, the minutes flew by and soon it was 11pm! As the venue was slowly closing, we said a final “goodby” and rode back to our hotel. During our conversation, we were told that tomorrow, due to bad weather, the balloons were not going to fly. Initially, we had planned on getting up at 5am to see this event. No hot air balloons in the morning were good and bad thing at the same time as it gave us the opportunity to sleep a little longer 😉