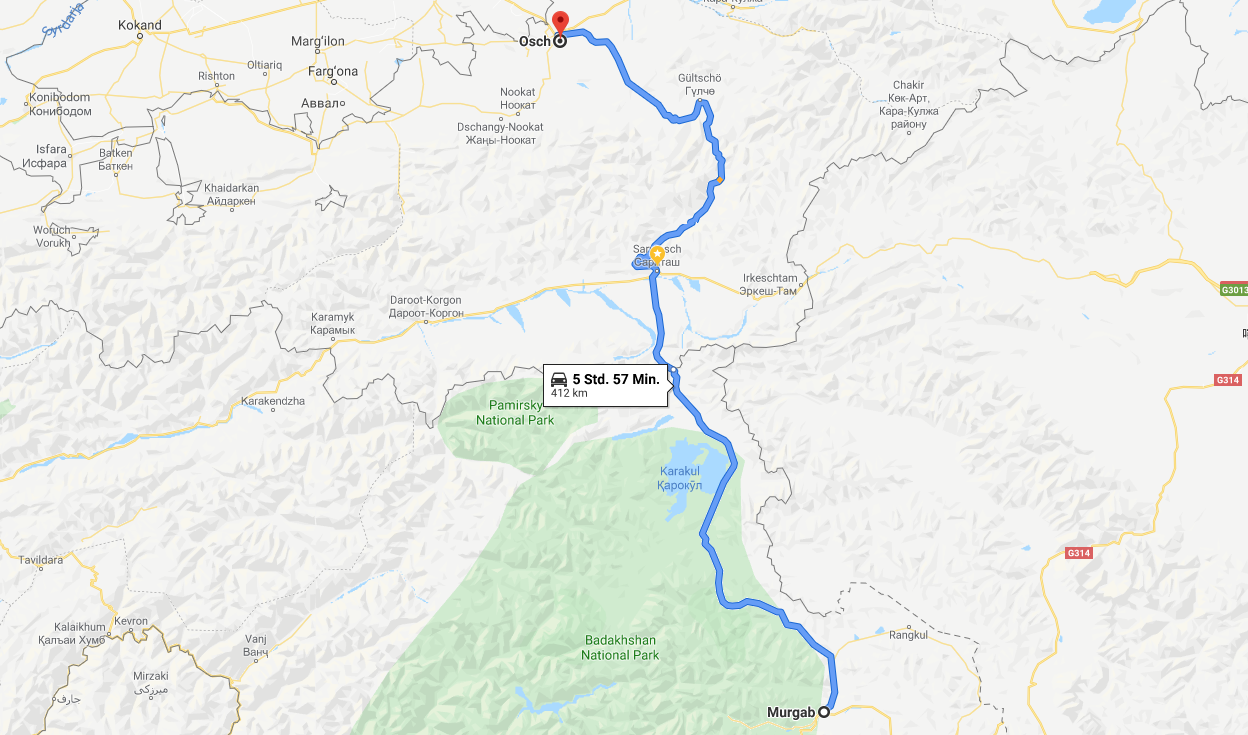 Due to the fact that the power was shut off at 10pm, we finally had a decent amount of sleep last night. Even though we had breakfast at 8am, we were almost the last guests in the hotel. While we were having breakfast, a Tadjik man came to us and asked in fluent German, if the two BMW’s were our bikes. The reason he was asking was because the bike of Chris was leaking some kind of fluid. But it quickly turned out to be a kind of “false alert”. The fluid leaking was petrol. We had filled up yesterday just before stopping at the hotel, now the bike was standing in bright sunlight which caused it to warm up and the petrol to expand.

Once this was cleared out, we finished our breakfast and got on the road for the Tadjik-Kyrgyz border. The road still made sure we kept our attention on the road: Occasional potholes or sections of gravel and dirt made it necessary to stay focused on the road. At one of the bigger bumps, Chris lost the low fender mounted just above the front wheel. The part just broke off and he had to go and search it until it became clear what exactly had just fallen off again.

The first group of travellers we met were three French on XT660R’s – exactly the same group we had already met on our first day in Dushanbe! Shortly afterwards we reached one of the “famous” Pamir Highway points of interest: The sign announcing the Ak-Baital Pass which lies 4655m above sea level which marks the highest point of the Pamir Highway. When we lined up to take some pictures, Chris noted that Fabi had lost her numberplate! We turned around and looked for it but it was yet another case of “The item you are looking for can not be found. Over the course of the day, Fabi’s lower fender and a part of her remaining pannier were added to the list of items that had fallen off.

The Ak-Baital Pass itself wasn’t a that spectacular ride. In contrast to the remaining road, the ride up and down was gravel instead of tarmac but in good condition. Some kilometers later we approached the Karakul lake. The lake lies higher than the famous Titicaca lake in Southern America but probably gets a lot less visitors. The blue lake together with the distant mountain peaks provided for (once again) amazing views. While we continued on the road, we now constantly had a fence on our right side, marking the border to China. While the fence itself wasn’t exactly “impressive”, there were also kilometer-long sections where we could have entered into China without anybody noticing because the fence was collapsed.

The first checkpoint we reached was also the Tadjik side of the Tadjik-Kyrgyz border crossing. In between the two border posts there is a kilometer long strech of no-mans land which is in horrible condition. In this no mans land we also saw a small house with a written “HOMESTAY” on the wall. It appears that the no-mans land is home to at least a million marmots. These small fluffy balls where everywhere and Fabi being Fabi stopped all the time to have a look at them.

Just before we reached the Kyrgyz border post there was a puddle across the right half of the road, the left side was filled by thick, wet mud. Chris made the mistake of not paying full attention and tried to ride through the mud on the left. When he entered the mud he realized that he might be riding a little too fast (30km/h), pulled the front brake and crashed onto the left side. After a moment of shock, both of us realized that everything was ok (only the left ankle hurt a little) and Fabi, upon seeing how Chris was looking, could not stop laughing.

Luckily there was a trickle coming down from the mountain right next to the puddle (hence its existence) so Chris could clean himself a little. After his bike was in the upright position again, Chris noted that one of the two main holders of his left bag had partly ripped off. Nothing too serious but that should be fixed in case we are going to encounter some more bumpy roads in the future. Right around the next corner we arrived at the Kyrgyz border. They had a power outage so the papers had to be filled out by hand. Interestingly they also asked for our E-Mail addresses and WhatsApp phone numbers. We wonder what this data will be used for. As the last step, our passports were photocopied by the only working electric device which was powered by a petrol powered generator.

At the beginning Kyrgyztan wasn’t much different to Tadjikistan. Bumpy roads through a mountainous scenery. Sary-Tash was the first bigger city in Kyrgyztan. Earlier we had heard a lot of good about the city but the reality was sobering. They also had a power outage which meant we couldn’t get cash and there were ever more children shouting “HELLO HELLO”, “WHAT IS YOUR NAME?” and “MAJM MJAM”. Only later we realized that “mjam mjam” probably was a way of asking for candy.

Luckily the road got better after Sary-Tash and we cruised along a river leading down the mountain. One thing we noted was the omnipresence of horses. There were people riding them everywhere: On the road, inside cities, old people, young boys etc etc..

Near Osh we filled up our tanks and achieved the record consumption of an average of 3.03l/100km! In Osh we got a hostel in the city center near the workshop of Zorro Moto where we planned on doing oil changes on our bikes the next day.