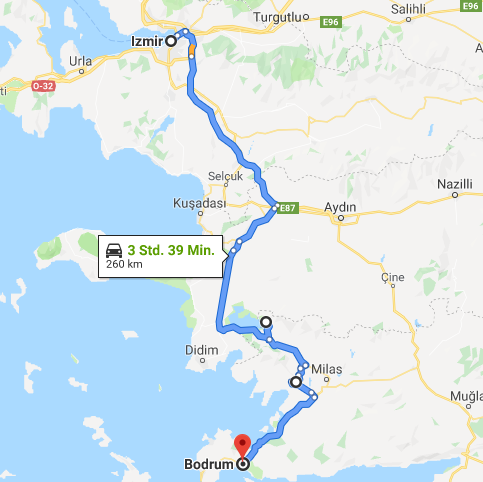 The dinner last night left us with full bellies and an immense amount of markers on our map with either waypoints to use for routing or points of interest to visit. One of the places that we were recommended to visit was Bodrum in the south west of Turkey. Conveniently we also had some waypoints to create a route that was supposed to be a little more interesting than just straight roads.

For lunch we stopped at a tiny village that lay above the lake Bafa Gölü. This resulted in a nice view while we were sitting in a small cafe as the only guests. After returning to the route, we had a second section on smaller roads. This time the road led us up a mountain which resulted in some nice twisties combined with a nice view over the surrounding area!

Thereafter we got on the big road to Bodrum. The city lies on a peninsular. As a consequence, you only get there if you want to get there. It turns out that normally a lot of tourists want to get there. Already on the way we could see the gigantic hotel complexes and impressive entries to high priced resorts. On the other hand, the road was in superb condition and followed the coastline closely.

Bodrum itself showed more of what could be expected by the views we had on our way. The seaside is very touristic and it was pretty hard to find the small campground we were looking for in between the hotels. The main season is only starting next month. As a consequence, there was construction going on everywhere on the campground and the surrounding area. The female bathroom was under construction so the remaining bathroom was used by both genders alike. Not that it mattered that much as we were the only guests beside two other guys. Naturally, Fabi quickly made friends with the campground cats who then begged to get some of the sausage we were having for dinner. In order to be better prepared in the future, Fabi wrote “Cat food” on the shopping list.

As it turned out, preseason not only means that everything is polished up, but also that everything is rehearsed. The hotel next door apparently decided it would be the right evening to do a dry run of the evening entertainment program wich lasted until 2am. So we did not get that much sleep during the night. Maybe tomorrow would be better again. We both aggreed that the campground from two days ago was a lot nicer (and also cheaper). But nevertheless, the roads today were nice. And most importantly: The trust between Fabi and her bike was restored!