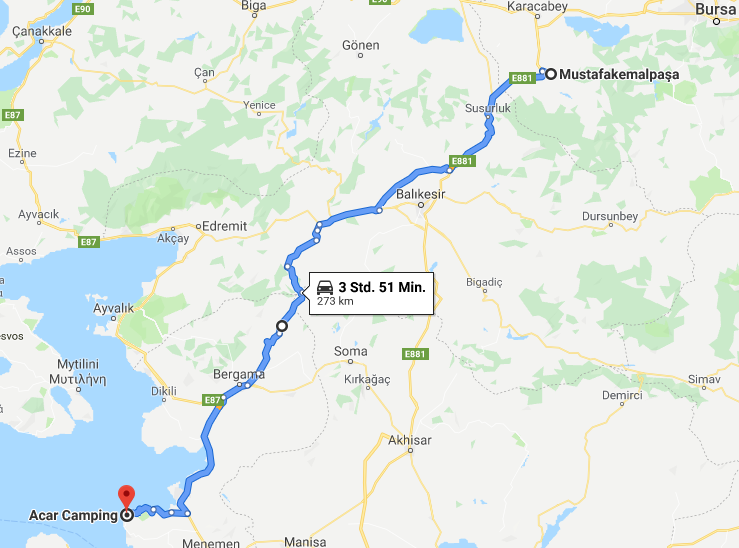 After a relaxing night, we again got on our way towards Izmir. Actually, the plan was not to head straight to Izmir but to make a stop at Bergama on the way. Bergama lies northern of Izmir and is maybe better known under its former name “Pergamon”. The ancient Pergamon is a city founded by the greeks. Today, the ruins of the city can be visited.

To get there, we took the highway. The toll system for this section was different. Upon entering you get a magnetic card which is then used to calculate the toll you have to pay. During our ride on the highway we overtook a biker cruising along. As we were passing him, Chris noticed that he had his sidestand out. Apparently, there was no system to prevent riding with extended sidestand. So he signaled to the biker to make him aware of the problem. He understood our intentions and retracted the stand.

As we left the highway, we pulled over in a parking lot to organize the receipt and the change. While we were standing there the biker we had just saved from a potential accident arrived. We had a short talk with Murat where he asked about our route and we got to know about his bike. He got it this year and had a crash a couple of days ago. As a result of the crash, his crashbars broke and he hurt his finger – but that did not stop him from riding.

Soon, we left the main road to head for Bergama. The road was now smaller and filled with curves. For lunch we stopped at a small fountain in the middle of nowhere. There we had our lunch consisting of an apple and the leftover pizza from yesterday. Pretty delicious and nutritious. When we continued on our way, Fabi spotted a tortoise strolling over the road. Naturally, it was rescured quickly and placed in the roadside ditch.

At around 2:30pm we arrived at Bergama. The archeological/touristical site lies atop of a small mountain. You can reach there either by cable car or using a small road. The cable car is apparently mainly used by groups of tourists arriving by coach. Entry was 35 TL per person which, in our opinion, is pretty hefty considering that the site is pretty small and information is limited to a few charts. But the views on the ruins themselves and the surrounding countryside is definitely impressive. After having a look around, we soon left as we still had some distance to cover. Also, the entrance area was very touristic with small market stalls selling odds and ends to tourists.

We soon realized that getting to Izmir would be a little too much for today. Instead we decided to try out our tent. Using Google Maps we found a series of campsites located next to the sea. The first one was open and we decided to stay for the night. As there were no other guests besides some locals with small huts we chose a spot right next to the beach with seaside view. Fabi made friends with the campground cats and dogs and we prepared dinner (Soup & bread) on our cooker. Then we got into our sleeping bags and fell asleep to the sounds of the waves 😉