After a nice night of sleep we woke up early with the intention to get to the Turkish border quickly. Our goal was to arrive as early as possible in order to avoid long queues. The ride to the border was short and we soon arrived there.

Controls on the Bulgarian side were passed swiftly by us. We then queued up for the turkish side. While we waited, Chris remembered that we would need the “green cards” from our insurance companies which testified that our insurance is also valid in Turkey. In total there were three different checks where varying combinations of our personal and vehicle documents were checked. During the last one, there was a problem. The lady made clear that some “authorization” was missing and pointed both of us to an office further back. There, the official explained to us that as we were driving vehicles not registered in our names, we would need an authorization by the owner. Interestingly, a photo of the owner passport is sufficient as authorization. Opposed to this, german webpages recommend a written document certificated by an turkish embassy for this purpose as we found out later.

Either way, this is a point we had missed during our preparations. If you plan to to travel to Turkey with a vehicle that is not registered in your name, make sure you also have a photo of the ID of the original owner with you!

So we called home where luckily, we were both able to reach someone directly. Without having to wait long, each of us received a photo of their father’s ID via WhatsApp (Our bikes are both registered to our father’s names as this results in cheaper insurance in Germany). This satisfied the border guard who sent us off to the luggage check. Here one last guard had a look at our luggage to check for contraband. Luckily neither our tent nor Chris’s laptop bag were confiscated. After this last check we were welcomed to Turkey and could continue on our way.

Conveniently there were two ATMs directly behind the border. Fabi tried to get some Lira but her card was declined by both ATMs. So Chris got us some Lira to be used down the road. To get from the border to our next destination Istanbul, there are two options. Option 1 is the highway, a toll road. As Polly had told us that the toll system in Turkey is quite complicated, we sticked to option 2, the “D100”. It runs parallel to the highway but is limited to 90 km/h instead of 120. Also, it goes directly through cities instead of around them. As a consequence, your journey will take longer than if you’d take the highway. As the total distance wasn’t too long, this was not a problem for us.

What was a problem was the fact that the weather got slightly worse. After a sunny, 20°C+ day yesterday, it was cloudy, windy and some rain was falling from the sky. We stopped at a gas station so Chris could put the waterproof liner in his jacket. As we were standing there, we were approached by one of the workers. He spoke some english so he and Chris had a short conversation. During this, Chris got to know that he liked the Youtube channel of “1000PS” which is also the favorite motorcycle Youtube channel of the two of us. We gave him one of our stickers and got on our way again. One short stop for refueling (Gas in Turkey is cheap at around 1.05€/l) and we arrived in the crowded outskirts of Istanbul.

At first we were a little confused as the GPS said that we still had 50km to go. But taking into account that Istanbul has over 15 million inhabitants it makes sense that everything is a little bit larger than we are used to.

We had been warned beforehand that the traffic in Istanbul would be horrible. At first it wasn’t that bad but soon it became worse. The enormous number of inhabitants and 4pm don’t mix well. In the end it took us at least one hour to traverse the last 10km which led through small streets and steep alleys. To make matters worse, there were differences between the GPS map and the real life map – so we had to improvise. Also, the weather had gotten better and we were still wearing our warm and waterproof equipment while the temperature outside was 20°C.

In the end all went well and we arrived at the “Alf Hotel” standing in our own sweat. Our room was on the 4th floor and with the welcome “room upgrade” we got, we had a 3 bed room with seaside view. This sounds more glamorous than it was, but it was quite nice nevertheless. Especially since the extra space meant we could spread our luggage a little to reorganize it.

Private parking at the hotel is something which is reserved to the more expensive hotels in Istanbul. The bugdet alternative are “otopark”s. These are essentially guarded parking lots. Out of practicality we chose the closest one to our hotel. Here, the cars were cars were parked in a sophisticated manner which reminded us of the board game “Rush Hour”.

Essentially, each car blocks multiple others. In order to get to one specific car, it is necessary to move five others out of the way. Interestingly, one of the guys moving the cars looked like he was 12 years old (judging by looks and size). Nevertheless he put the foot down on the gas in the 30m parking lot and parked in reverse and parallel better than probably 90% of the German drivers. 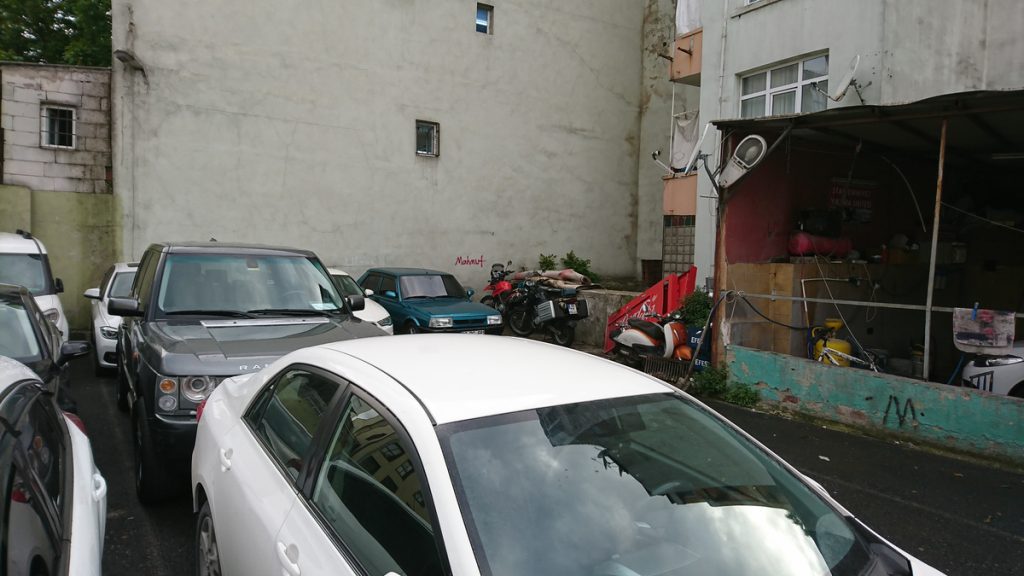 Later that day we had a walk around the quarter where our hotel was located. Here we got some Pide & Kebap for dinner along with some essentials (bread & water) from one of the small “Mini Market”s which exist at every second corner. We then had a no-light dinner on the terrace on top of our hotel. We enjoyed the pretty nice view over the city. In Germany however, the terrace would be closed ten times already because of a long list of construction defects like missing railing or a collapse hazard of the roof.