As an other fairly well known motorcycle traveller always says: “Another day, another adventure”. This was definitely true for today. As our host did not offer breakfast, we had purchased some small things on the previous evening. After we were done, we packed up and got ready.

Yesterday evening, Chris had checked his post at the F650 forum before going to bed. Less than one hour after he had created the post, already three users had answered and provided suggestions on how to fix the problem. In order to test these, Chris dismantled Fabi’s fairing again. Tip Nr. 1 was: check the battery terminals for a proper connection between the battery and the bike’s wiring harness. The ground connectione was doing well. We had checked this on the previous day. However the “+” cable, connected to the starter (and other components), was not as thight as it should have been and could be wiggled around. After tightening the connection, we tested it and everything worked fine again. As Chris was fixing the bike, a horse card carrying a car body passed.

So we put on our luggage and set off towards Bulgaria. Initially, the plan was to just take the shortest route to Istanbul. However, on the previous evening, while looking at the map on the GPS, Chris had seen that in the waypoints of Horizonsunlimited an entry existed in northern Bulgaria. It was called “Doug’s Moto Camp” and  marked the address of the “Motocamp Bulgaria” which is fairly popular with motorcycle travellers. They provide accommodation as well as a workshop and the possibility to get required spare parts. As we were not 100% sure that the Black Beauty was working 100% fine again (and it also sounded cool), we decided to head there and stay there for one night.

To exit the city of Niš we had to take the same route we took yesterday to get into the city. As it turned out, the military wasn’t done yet with their “exercise” and half of the road was blocked off by the police again for the military to get around easily. So we were driving on the first half while parallel to us, on the second half, a tank convoy was driving. Seeing the big black clouds of smoke coming from the exhausts, hearing the tracks roll over the tarmac and also seeing the sheer size of those monstrosities was and amazing, albeit also a little intimidating, feeling. Sadly Chris didn’t mount the actioncam to his helmet so there are no pictures of this :(. On our way out, Chris noticed that in one of the groups of policemen there was standing an Aprilia Shiver in the black/white color scheme as a police motorcycle. The Serbians definitely have a good taste for motorcycles :D.

Then we made it on the highway. It was in good condition and pretty empty. In the distance we had a view on first mountains since we left Austria. On the first kilometers, we saw all kinds of military equipment lined up on the roads next to the highway. As we later found out, there was a big military parade in Niš in order to celebrate the 74th anniversary of the end of the second world war.

Soon the highway ended and we were redirected to a diversion. This road led through a small canyon with some nice twisties. The views were pretty nice, especially when we stopped for a short break on a corner where you had a view on an old looking mine which could come right out of a western movie.

After a short photo break, we continued our way along the small road. After some more kilometers, the road returned to the highway. Apparently, the section in between is still under construction. On the highway we were practically alone. Most of the time we could not see any other vehicle at all. The tarmac was in perfect condition so we covered our last kilometers in Serbia quickly.

The border itself was passed quickly by us. Show passport and vehicle papers, smile at the border guard and you are done in less than two minutes. When we were arranging our papers after the border, two familiar bikes arrived: They were two bikers whom we had already met yesterday during a fuel stop. One was riding a F800GS, the other one a K1300S. Soon we got onto the highway again, next destination: Sofia. There, we would have to decide if we want to make a one day detour to the Motocamp or if we take the shortest route to Istanbul and skip the Motocamp.

We arrived in Sofia during early afternoon which was the perfect time for lunch. Chris went to get cash and also returned with two… Something? He managed to get the info, that the meat was chicken but the rest.. we still don’t know exactly. It resembled the normal “Döner” we know from Germany but with some changes. One change which we would also like to see in Germany are the fries which are put directly into the bread. That tastes amazing! 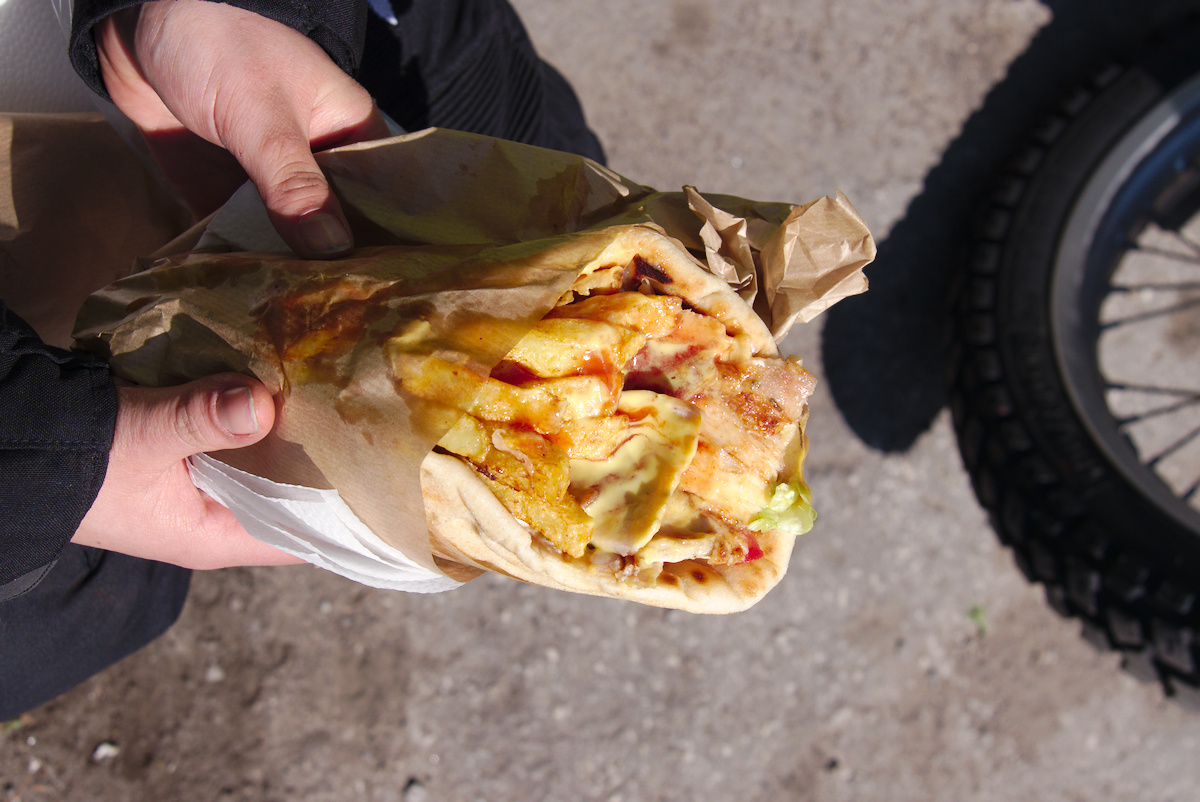 After this delicious lunch, we decided that we’d spend the extra day in Bulgaria for two reasons. Firstly, the pictures on the website looked amazing with cozy rooms and secondly as this would give us the opportunity to visit the “Sovjet concrete UFO” officially known as “Buzludzha”. It was constructed by the Bulgarian communist party in 1981 and is a popular landmark in Bulgaria.

So we got onto the highway in the northern direction. It leads through the tree-covered mountains belonging to the Balkan mountain range which resulted in some nice views during the ride. The last part of the trip was on normal country roads with a speed limit of 90 km/h. As we soon noticed, this speed limit only serves as a recommendation for most drivers. We got overtaken countless times at speeds that exceeded our normal highway speed. At around 6pm we arrived at the Bike Camp which is located off the main road in a small village. From the first look, you wouldn’t expect that anyone lives in the village as none of the houses are plastered and the windows of ca. 50% of the houses are broken.

Nevertheless, we found the Camp and were greeted by Ivo, the owner of the camp. He founded the camp in order to provide an accommodation for bikers in a way that he would like to find on the road. This included comfortable beds, hot showers, wifi and a place to work on the bike. Working on the bike wasn’t on our list anymore as the Black Beauty had worked flawlessly during the day. Nevertheless, we didn’t regret going here as Ivo and his wife were very welcoming and made us instantly feel at home. There were only two other guests at the camp: Two travellers from Germany on their Husqvarna TR650 Terras who had also arrived today. We did not meet them this evening.

In order to get something to eat we had to get on our bikes once more. Fabi didn’t want to ride anymore so she took the pillion seat behind Chris. We went to the nearest town which was around 15 km away. At the local Billa we purchased bread and some hot items. Then we set the GPS to the bike camp again. We could not take the same route back again as one of the roads was a one-way road. So the GPS sent us on a small adventure over the back roads. All in all the return trip was 30 kilometers long and led through several small villages where we received confused looks by the locals. Against all odds, we made it back to the camp at daylight where we enjoyed our small dinner before going to bed.