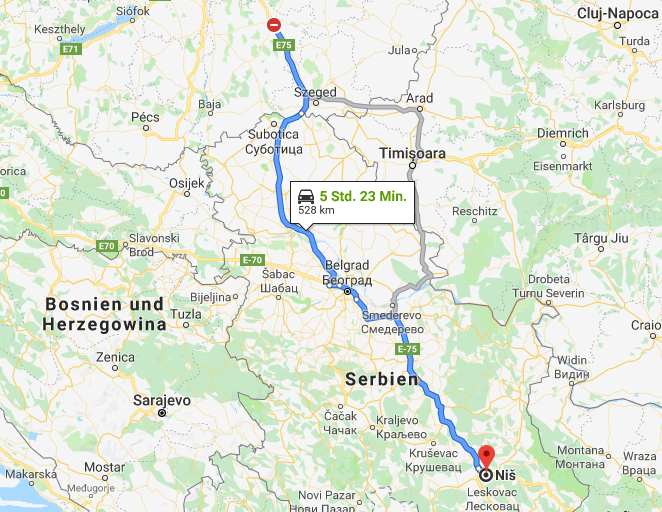 After arriving in the rain the previous evening, we woke up to cloudy but dry weather the next morning. The breakfast was the first station of the day. It became obvious that we were no longer in Germany when we had a look at the selection of sausage and cheese which was offered. 90% meat, 10% cheese. As a consequence, there was quite a lot of variation available.

After finishing the breakfast, we went on to mount our luggage on our bikes again. The weather still was pretty cold so Chris got out his beanie. We noticed that it is defenitely necessary to improve this process as it took us ages to complete.

Having successfully completed this mission, we took off for the Hungarian-Serbian border. It was still pretty cold and we were glad for the combination of handguards and heated grips. Before arriving at the border, we stopped for a short break. On the parking area next to the highway we noticed a series of cars parked besides each other which were almost completely dismantled. No wheels, no steering wheels etc. It looked a little bit like a graveyard for cars. Maybe this is the normal hungarian way of disposing cars which you don’t want anymore?

After this pee break, we rode the last few kilometers to the border. As Serbia isn’t in the EU, there were actual border controls. Fabi was a little worried about the checks on both sides but everything went smooth and we completed the checks within 30 minutes (including waiting time).

Our goal for this day was the city of Niš in the south of Serbia, so we still had some distance to cover. Based on our experience from the last days we increased our “cruising speed” on the highway to indicated 120 km/h (115km/h according to our GPS). We were however, not able to sustain this speed as the highway right after the border was in a horrible contition which made us thankful for the long suspension travel of our bikes.

Like in Hungary and Austria, the highways in Serbia are toll roads. In theory this should lead to better road conditions but… yeah, not so much. The system works by using a system of magnetic cards. When you enter a toll road, you stop to get a card from a machine. When you leave the road, you hand your card to an employee at the exit checks and pay the toll. When we had to get our first card, we stopped right in front of the barrier besides each other. Chris drew the card and as he went on to pass the barrier, Fabi decided to just follow him. So we had to stop again right away and Chris went by foot to get a second card. This only happened once, the other toll stations went smoothly.

Belgrad, the capital of Serbia, lay on our way to Niš. We didn’t have the time to stop for sightseeing but the highway leads right through the city. As a result a lot of the traffic of the city flows over it. Bus stops are in small parking bays right besides the highway and people are standing on the shoulder waiting to be picked up by their ride or else. As the traffic was pretty dense, we had to be concentrated in order not to get into dangerous situations. This danger was further amplified by the fact that Serbian drivers (similar to Hungarian drivers) don’t really care about indicators or safety distances. But there are some “unwritten” rules and if you manage to follow them, you’re good.

Around Belgrad the highway was toll free and we managed to cover some kilometers in a quick manner. At some point it became a toll road again. We exited the highway as we were approaching Niš. Therefore, we had to pay toll one last time. We went to the toll booth one after another. As Chris went first, he pulled over right after the payment area to wait for Fabi and to put on his gloves. When we were ready to continue again, Chris heard a worried “Oh no, now everything is dead” from Fabi. As she pressed the starter button, her entire dashboard went black and unresponsive to any key presses. So we brought out the tools and started to dismantle the fairing in order to get to the battery. After some inspection, Chris narrowed the error down to a loose connection in the vicinity of the the starter relais. He managed to get it working again, however he was not 100% sure how he had done it.
As we were working on the bike, a truck stopped and the driver offered us help, stating he knew someone who would be able to help us. We declined the kind offer as we were already in the process of reassembling the bike.

Relevied that the bike was running again, we headed to our accommodation for the night. On the way we noticed that the police had blocked several roads and was manually controlling the traffic. Instead of normal traffic, all kind of military vehicles were driving on the closed roads. The vehicles ranged from normal busses transporting soldiers to mobile rocket launchers.

After arriving at our hotel Chris wrote a post in the aweseome F650 forums in order to get other opinions on possible causes of the error. We then went out to grab something to eat. We found a small bakery wich apparently is open for 24h per day. After our dinner we fell into our beds.