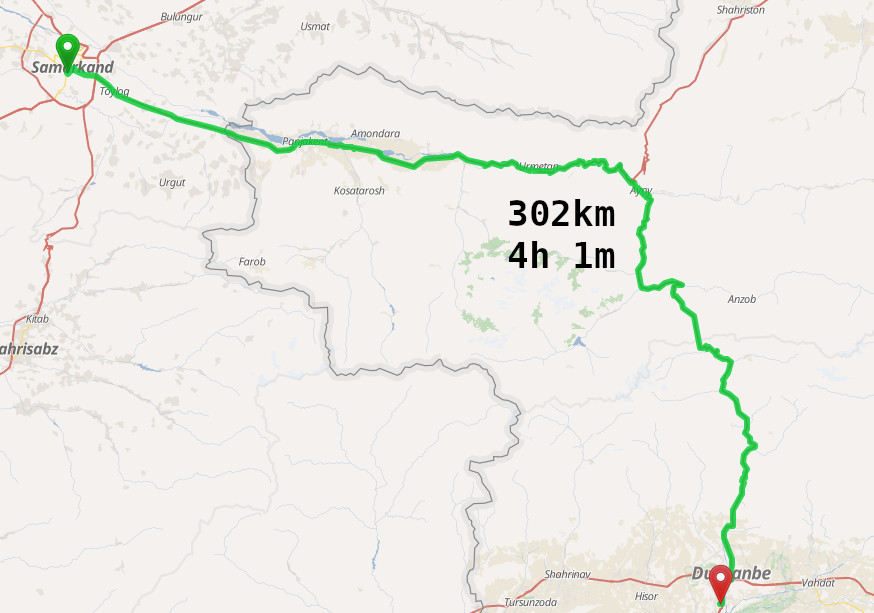 First goal for the day was the border from Uzbekistan to Tadjikistan. After leaving Samarkand we could see a change in the landscape. Instead of the endless flats of the last days we could see the mountains rise in the distance. Unfortunately, the ride to the border was more of yesterdays’ “100 – 60 – 50 – 60 -100” speed limits. Also, it was very windy which made the ride quite annoying.

The actual border crossing was quick and easy. From our accomodations in Uzbekistan we had collected several “registration” slips which are supposed to be mandatory. However, nobody wanted to see them. Instead we got our exit stamp right away. The luggage check was similar: “We trust you” and off we were. On the tadjik border, the normal procedure was quick. A difference to previous borders was that we had to pay a “road tax” of 10$ per vehicle. This appears to be an official thing as we had read about it on the Internet during our preparations. Also, we got “a” receipt. Let’s this tax leads to good roads in the country.. One final check and we were in Tadjikistan!

The road led through a wide valley with high mountains on either side. Speed limits were 40 km/h inside of cities and 70(!) outside – oof. The driving itself was more comfortable than in Uzbekistan: less drivers were honking or flashing their headlights to greet us. Instead, almost all children we saw were waving at us! The road finally led into a smaller valley. After following a river for some time, the road turned away and climbed into the mountains. With the landscapes of the last weeks having been primarily flat these immense mountains were breathtaking. On the road we met a group of bikers: three french guys with XT660’s and a dutch and another french with 1200 GS’es who were also on their way to Dushanbe. We talked for some minutes and road off again.

Our bikes had no troubles climbing to the highest point of 2700m even though they “only” have 50hp. However, there were also tons of loaded trucks crawling up the steep roads. Apparently, they are carrying coal to the power plants located further south. At 2700m elevation we were faced with a decision: Climb further to 3337m or drive through the tunnel. The road leading further up however is not paved but rather a gravel road and is described as “not that easy”. On the other hand, the tunnel also does not have a stellar reputation. Until repairs which were finished in 2015, the road was a series of water filled potholes. Also, no lighting and ventilation exists. With the repairs, the situation has improved – lights were installed and the road is now paved. So, we decided to ride through the tunnel instead of going over it.

As we were taking a break before the tunnel, we were approached by a curious police officer. He was obviously interested in our bikes and Chris took some photos of him sitting on his bike. Chris also took a picture of him together with Fabi – the “very beautiful girl” as he described it. In the following weeks this would be a regular occurence – men approaching us and complimenting the beauty of Fabi. Is it because she rides a motorcycle? Or did Chris just get lucky? 😉

After this photo break we rode through the tunnel. Obviously, both of us survived. We also aggreed, that the tunnel is definitely not the “tunnel of death” as it is called on several websites. While it’s not up to European standards, it’s “just” a long, dark and stuffy tube. The lighting is not very good, but that is not a problem since you just have to drive straight and there are no potholes whatsoever. If you manage not to fall unconcious due to the limited supply of oxygen arriving at the other end should not be a problem. On the other side we were again greeted by sunshine and an amazing view over a valley and the surrounding mountains.

From there on it went downhill. Not literally, just the road. The road to Dushanbe was declining all the time. In fact, we could have ridden to Dushanbe without even starting our engines. While we were descending, traffic was increasing and we could see signs with adverts for skiing resorts and similar establishments – something we did not expect to find here at all. But it makes sense, the mountains are definitely high enough for some proper ski runs.

Dushanbe was a proper capital city: big roads, skyscrapers, shopping malls and, of course, lots of traffic. Our accomodation was located in some small road in the south of the city. Unfortunately, we could not get the room we were planning on getting. So, we had to get a more expensive room – which still was without a private toilet. But it was clean, which we consider to be the most important point, so that’s good. As we were unpacking, we heard more motorcycles arrive: it was the french/dutch group we met on the road!

Afterwards we set off to get dinner and a SIM card. While waiting, we discussed the day. After some minutes, the guy behind us inquired, if we were from “Germania”. It turned out that he was in Germany in the year 2015 – resulting in him speaking a little German. As it was our turn by now, he kindly helped us with chosing a tarif and also transferring our digital documents to the store clerk. A very nice experience!