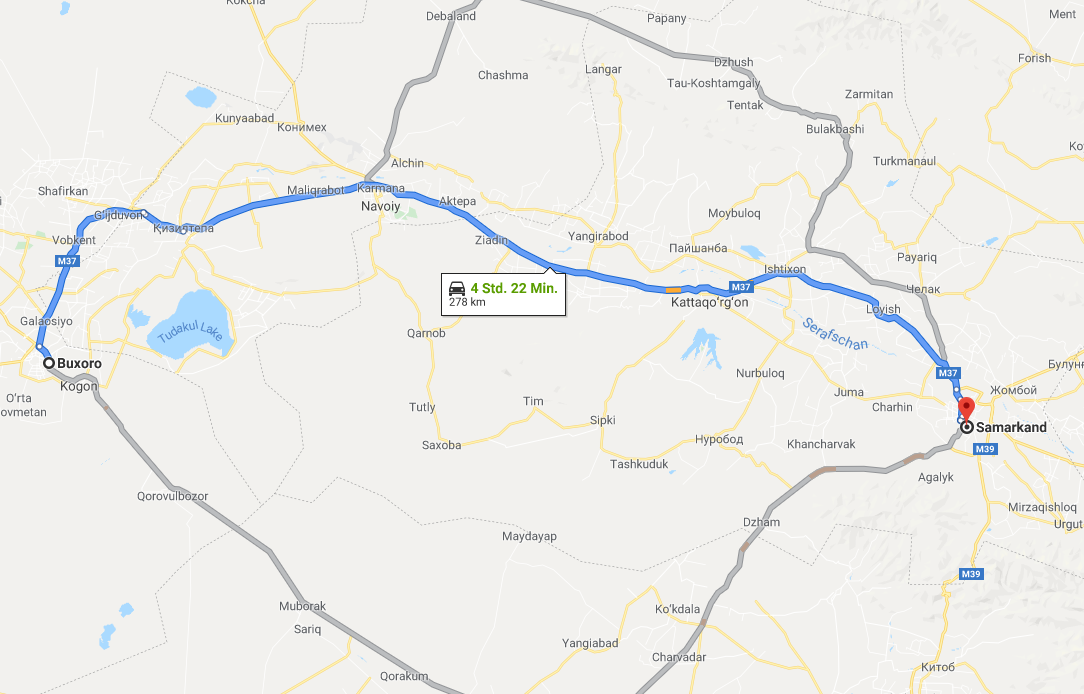 In the morning, Chris was feeling OK again. So we decided to continue on our way. This would lead us to Samarkand which wasn’t too far away. So, todays ride should be a short one.

During breakfast we met two cyclists from Hamburg who were on their trip from Germany to Singapur. Their plan was to move to Singapur, so you could say that they were in the process of moving. When we met, they were on the road for 16 months already!

After we packed, we looked for some petrol. After filling up, we noticed that we did not have enough Somoni to pay. Luckily, the guy from the petrol station accepted US Dollars without any problem. The petrol was “only” 91 octane. But by now we weren’t too worried about that as 91 didn’t cause any problems during the last days.

The actual drive to Samarkand was pretty annoying. Road wasn’t a highway, but instead more of a country road which led through all of the villages along the road. This resulted in frequent changes of the speedlimit: 100 – 50 – 70 – 100 – 70 – 50 …. In combination with the “odd” driving style of the locals and the high temperatures (around 40°C again), the ride was not too pleasant.

One word regarding the traffic: The normal traffic consists 50:50 of old Sovjet-era vehicles and new’ish Chevrolet Cobalts. The latter ones are apparently produced domestically. Combined with high import tax on cars, the Cobalt appears to be the go-to choice when buying a “better” car. An other hinderance with foreign cars might be that all vehicles run on liquid gas (hence the lack of petrol stations with normal benzin). Big bikes are not common at all in Uzbekistan. Hence, travellers stand out quite a bit. The Uzbeks are a hospitable people and get excited when they see foreigners. Unfortunately, their way to express the excitement is to honk. So, we got honked at a LOT. At first this was strange, as we are used to honking being a way of saying “get out of the way” – that’s not the case in Uzbekistan. Even though it’s meant to be nice, it gets annoying (and irritating) pretty quickly. But on the other side, it’s nice to see people being excited to see you, waving and taking photos. On several occasions, Fabi managed to hand over one of our stickers to the passengers of cars overtaking us.

Despite the hinderances, we approached Samarkand. During one of our stops, we got the info from Alois and Eisi that they were taking a day off, as they had gotten sick. This meant that we probably won’t meet them again (at least on this trop). Arriving in Samarkand, we got a small hotel and went out to do some proper tourism after skipping it yesterday. We went to the Registan which was packed with tourists from various countries. Samarkand is definitely the most touristy city we have been to since Istanbul. Understandable as the Registan itself is already very impressive!