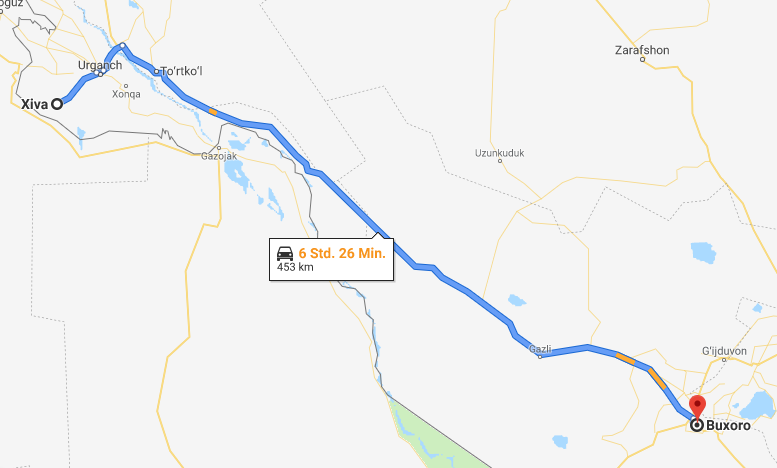 As we had arrived very late yesterday, we did not have time to do some sightseeing in the famous old town of Xiva. So we got up early in order to have a look around before our breakfast. This had the additional benefit that the turnstile that is normally used to check the tickets wasn’t operational yet. So we got in for free. A little ironic, since there is an “ungated” entrance 100m to the south. But nevermind.

The core of the old city is part of UNESCO world heritage and fetures some impressive looking buildings. This also is true for the city wall which is distinctively different than the medieval European city walls. It became apparent that Xiva is way more touristic than any other city we had visited since crossing from Baku. While we were wandering around, the locals were setting up their booths to sell souvenirs to tourists. Also, there were two camels laying around – probably waiting to take photos with tourists.

After our little excursion, we got back to the hotel for breakfast. As we (together with the other Germans) seemingly were the only guests, the breakfast was prepared only for us and served directly at our table. Once we were finished, we got ready to get going. The other two had already left but we promised to stay in touch.

Yesterday, we had spent our last local currency. So, plan was to get some before riding on. There was a single(working) ATM near the entrance of the old city but when we went there, it was packed with at least 25 locals standing in “line” (not) to get cash. So we decided to go elsewhere. Our GPS listed a few ATMs and bank offices in Urganch, the next bigger city. We rode there and found a small bank branch. The employee there told us that they did not have cash for withdrawls and gave us the directions to the local headquarter of the bank. It was a multi-story building with a lettering reading “BUSINESS CENTER” on the front. Inside, several other people were already waiting in line to get cash. When it was our turn, the lady serving us explained that we could only withdraw US dollars as they also had no Somoni available. Uhh.. A major bank has no local currency available? Ok I guess. So we got some dollars and exchanged them with the money changers who were already waiting across the street. Looks like this is how things work around here.

With the cash problem out of the way, we could finally start to cover some distance. Todays’ stretch to Buxoro included a 280km, mostly straight stretch through the desert without any petrol. But first, we had to get petrol as both of us were already driving on reserve. We found a petrol station and Chris inqured about the quality of the available petrol. According to the employee, 91 octane was available. Good 91, as he signaled with a thumbs up gesture. According to BMW, Chris’ bike should be able to handle 91 without any problems. Regarding Fabis’ bike we were not sure and wanted to get at least 93 octane. After some back and forth “91 good” – “We need 93” – “91 very good” …, the attendant pointed at one gas pump and let us know that here, suddenly 93 octane was available. Suuuure. As we were uncertain about the availability of 93 octane fuel during the next days we decided to try our luck with the “93”. At least we got a good deal and only paid the price for 91 octane!

We continued, Fabis bike still ran and we approached the “no petrol” zone. After filling up one last time, we started the ride through the desert. Besides some minor exceptions there really was “nothing” visible from the road. To the left and the right you could only see yellow desert/steppe with some bushes. Luckily the road was in perfect condition so we could ride at high speeds. One of the exceptions from “only desert” was a cafe in some parking lot. When we arrived there was also a coach parked in front. While the driver was cleaning the windscreen, the tourists were having lunch in the yard of the cafe.

Chris ordered a shashlik with bread while Fabi didn’t eat anything as she was not really hungry. When the food arrived it was … not very inviting. The spitted pieces of meat were from some unknown animal, rich of fat and tiny bones and at least 50% was inedible (Those who know Chris will know that he normally isn’t picky regarding food at all!). The food was only topped by the price: We paid more than for yesterdays dinner which had consisted of two main courses instead of one. Looks like the owner knew how handle tourists.

We continued and soon reached the end of the “no petrol” zone. After a last stop, we approached Buxoro. In the meantime we had gotten info from Eisi regarding their whereabouts. Unfortunately, their hotel was a little out of our budget so we decided for a cheaper one and planned to meet up again tomorrow.

Already on the last kilometers to the hotel, Chris noticed that his stomach wasn’t 100% ok – probably thanks to the shashlik. But we still made it there, parked our bikes and got into our room. There, bad stomach cramps and the usual accompanying symptomps hit. As we realized that the medication we had with us was out of date since over a year, we headed to a pharmacy. Luckily, there are at least two in every street. Thanks to his acting experience, Chris managed to communicate his problem to the pharmacist and got some pills. On the 200m back to the hotel, hell broke loose – both, in his stomach and in the sky – a heavy thunderstorm had arrived. It suddenly started to rain while the wind threw around small objects. We split up: Chris made his way back to the hotel while Fabi got some things to eat in a nearby store. As Chris arrived back in the hotel, there was a blackout. When Fabi returned to the Hotel, she found that the storm had shattered the glass door at the entrance! All employees were standing inside, filming the hell outside – apparently, weather like this is not that common in Uzbekistan. Luckily the pills helped with the stomach cramps and the power came back after around one hour. But by now it was too late to do anything and so we decided to just go to bed early for once.