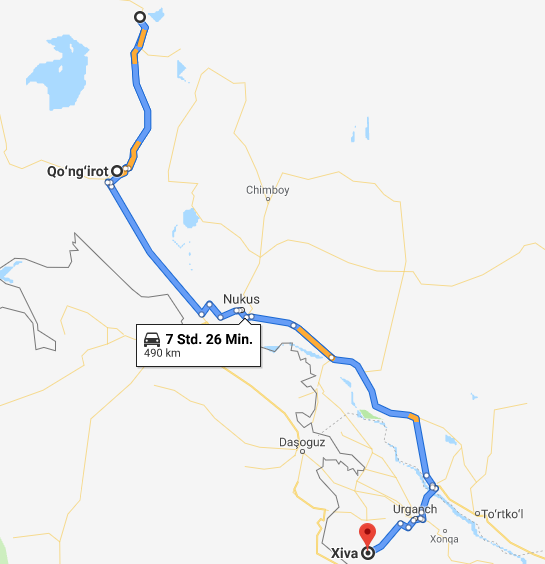 In the morning we awoke early. We didn’t sleep that well for multiple reasons. Firstly, as mentioned, our “room” was a dining room of the restaurant. Therefore we slept in our sleeping bags on top of the “pillow mats” that covered the floor. That itself would not have been too bad. What was more of a problem was the fact that at 10pm dinner guests started to arrive. They continued to eat and drink on the veranda until around 2am. Our room had a “window” to said veranda which didn’t really close. So we had the pleasure to hear every detail of the loud conversations they had.
As we left we could see one of the daughters clean up the remains of yesterdays’ party. Multiple (empty) bottles of booze were laying around – looks like they had a proper party.
The family who hosted us didn’t really notice us in the morning. Maybe that’s just the way Uzbeks are? A little reserved instead of the happy and welcoming nature of the Turkish people we met? Or maybe they considered us as annoying and wanted to get rid of us as fast as possible? We don’t know.

Anyways. First we got some petrol at the only petrol station of Kungrad. The city has multiple big petrol stations but all of them only have liquid gas available. Apparently almost all vehicles in Uzbekistan run on it. The petrol station sold “95” octane petrol for around 0,45€/l so we filled up and got going. We headed for the former shoreline of the Aral lake. At the former border lays the town Munyak. The road there wasn’t really good. A lot of small potholes made for a relatively bumpy ride – until we decided to adapt the driving style of the locals: full throttle and a speed of at least 80km/h. When sticking to this, the ride became noticable smoother. You almost didn’t feel the bumps anymore.

During our ride we saw two motorcycles approach from the opposite direction. As it turned out it were Alois and Eisi. They had spent the night in a quite nice hotel in Munyak and even sent us the address via WhatsApp. As we had no working SIM card we did not receive the message until later this day. If only we had known..
We talked about yesterdays’ road. The two also weren’t too happy with the road conditions and Eisi had lost some plastics. As we told them about Fabis’ Scottoiler, Alois kindly gave us a spare nozzle he carried with him. That ment that she would be able to use the oiler again!
The two planned to spend the night in Xhiva where they knew about a german owned hotel. We aggreed to meet there in the evening and went seperate ways: they headed south to Xhiva and we went north towards Munyak and the former lake.

The lake was pretty touristic by Uzbek standards. There was a sign leading the way and the actual site consisted of a pillar shaped monument as well as some informational signs. All this was situated on top of a small cliff. From there you could see down to where the lake once had been. Here, several boat wrecks lay next to each other. You could go there by taking some pretty new looking stairs!
We wandered around and took some photos. As we were getting ready to leave a group of tourists arrived. Man, this place really was packed that day!

We drove back to Kungrad. Here we filled up with the good 95 octane petrol (it certainly wasn’t 95), exchanged some more money on the black marked and bought a SIM card. Interestingly, we did not get asked for a passport. Instead, the guy taking care of us took some Uzbek passport from a drawer and (seemingly) registered our SIM card in that persons’ name. Not sure why he did that put the entire process was quick and cheap so we didn’t complain.
It was already lunchtime so we went to the Bazar to find something to eat. While looking for a restaurant we ended up in a big market hall for meat. Inside it was hot and you could see the dead animals laying around on long tables. No cooling whatsoever. Also, you could see flies, so many flies. Comment by Fabi: “eww”.
Doing the sensible thing we went to the restaurant next door and had lunch. Fabi took something vegetarian but Chris chose a Shashlik. Maybe not the wisest decision but everything went well.

After that we continued on our way to Xhiva. The road varied between “pretty smooth” and “horrible” but on average the road was way, way better than the one yesterday! On the bad parts, Chris at first lost two screws of the splash protection. After fixing it with some wire, it didn’t take too long until a bigger pothole caused the wire to break off without us noticing. Thereby the entire protection could swing around freely until, at some point, the weakest part of the construction gave up and broke. This transformed the “splash protection and chain guard” unit into just the chain guard. The splash protection part broke off relatively clean. So, annoying but nothing tooo terrible. Chris took the broken parts with him in order to scavenge the screws later on.
Finally, we arrived in Xhiva. It had been a long day with hot temperature so we were pretty exhausted. After some searching we found the hotel where the bikes of the other two were already parked. The information that someone in the hotel was speaking german turned out to be wrong but we didn’t care. The lady was nice nevertheless and our room had a shower and an AC – so, nothing to complain about.
It was too late for sightseeing so we just had a shower and went out for dinner with the other two.
Uzbekistan is getting more and more touristic. As a result, the restaurant where we went even had a menu in english and with pictures. Yay! So we knew what we ordered. On the downside, the prices were pretty high compared to other streetfood booths but still low when compared to European pricing.